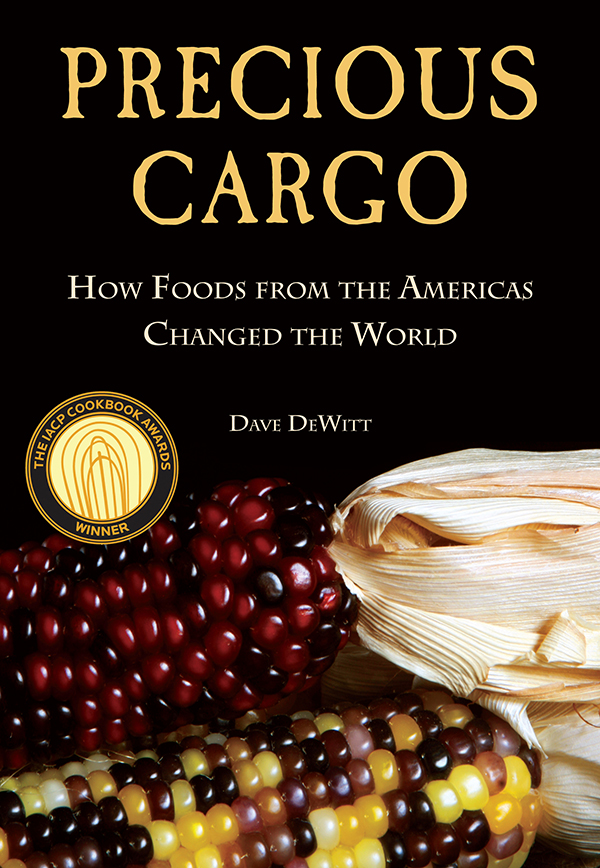 Precious Cargo: How Foods From the Americas Changed the World

Precious Cargo tells the fascinating story of how western hemisphere foods conquered the globe and saved it from not only mass starvation, but culinary as well. Focusing heavily American foods—specifically the lowly crops that became commodities, plus one gobbling protein source, the turkey—DeWitt describes how these foreign and often suspect temptations were transported around the world, transforming cuisines and the very fabric of life on the planet.

I admit that I laughed out loud when I reread historian Alfred W. Crosby’s 1972 diatribe against what he termed the Columbian exchange,” saying it “has left us with not a richer but a more impoverished genetic pool. We, all of the life on this planet are the less for Columbus, and the impoverishment will increase.” Instead of this sort of dated doom and gloom about the Columbian exchange, I propose a new vision of that monumental collision of foods and technology: The discovery of the Americas was a watershed event for food that forever changed history and triggered unforeseen advances in agriculture, enterprise, and commerce that allowed the development of the modern world. Admittedly, this progress came with horrendous problems, like slavery and the destruction of indigenous societies and species, but I don’t believe it serves any useful purpose to make moral judgments about historical events. The purpose of Precious Cargo, is simply to tell the many stories of how and why western hemisphere foods and crops conquered the rest of the world and saved it from not only culinary boredom, but mass starvation as well. See the Counterpoint Press catalog pages here.

PRECIOUS CARGO: HOW FOODS FROM THE AMERICAS CHANGED THE WORLD discusses the global food trade which has been around for thousands of years, and provides a fine story of how many Western foods evolved to move around the world, create new trends, and even save other cultures from starvation. It offers a lively yet scholarly discussion of how these foods were transported around the world and accompanies its discussions with color images and illustrations to make for a lively, involving culinary history. Even more compelling: it arranges its discussions by foods and includes the botany and anthropology of New World foods, making for a discussion that’s highly recommended for any fan of culinary history. —The Midwest Book Review, October, 2014.