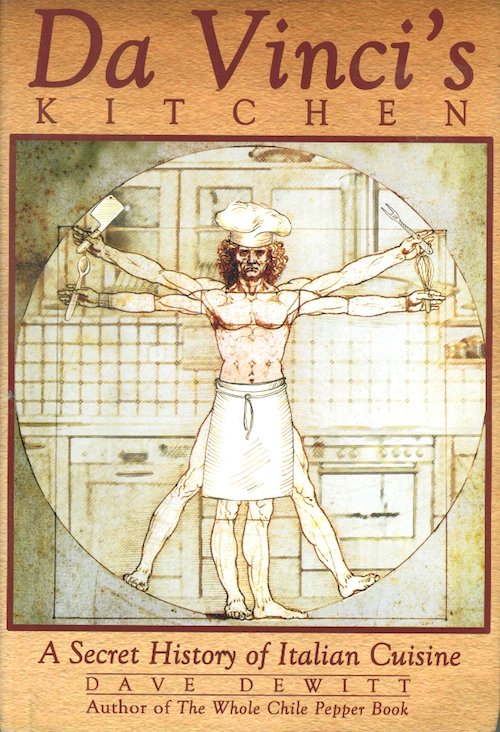 2006.  Da Vinci’s Kitchen: A Secret History of Italian Cuisine. Food history.  Dallas: Ben Bella Books.  This strictly food history title was a flop in the U.S. but quite popular in Europe and Asia, as my agent sold it to publishers in twelve countries including Poland, Japan, and China.

Part history, part biography, and part cookbook, this fascinating exploration of an as-yet unexamined facet of Leonardo da Vinci’s life focuses on what and how he ate. Da Vinci lived to be 67—nearly twice the average life span at the time—and his longevity may well have been due to his diet, which is reconstructed here complete with his notes on ingredients, portions, cooking, drinking, and kitchen inventions. The great artist, scientist, and inventor was no slouch in the kitchen, having worked as a kind of theatrical caterer, producing feasts with extravagant menus for royalty. This book unlocks his cooking code and the food history of his day, bringing 30 recipes up to date, including Da Vinci’s own salad dressing and an exotic saffron risotto with duck and mushrooms fit for a Medici.

And Da Vinci is just the beginning, as the other sections of the book vividly recount how the introductions of new foods from other places, including the New World, forever changed Italian cuisine.