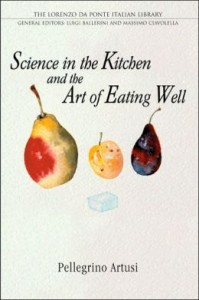 Editor’s Note: Since its publication in 1891, Pelegrino Artusi’s book, Science in the Kitchen and the Art of Eating Well, has been continuously in print. It was the first cookbook written in Italian for the home cook, and it is still beloved in Italy today, playing the same role as Joy of Cooking has in America. In this introductory section, Artusi proves that publishing hasn’t changed very much in more than a century. His first thirteen editions were self-published; this is his introduction to the fourteen edition, now published by R. Bemporad and Son of Florence. I have condensed this essay a bit. Artusi’s book is available in paperback from the University of Toronto Press. –Dave DeWitt 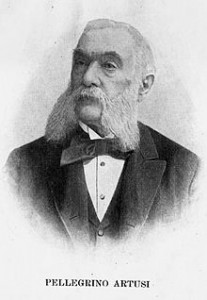 I had just put the finishing touches on my book, Science in the Kitchen and the Art of Living Well, when my learned friend, Francisco Trevisan, professor of literature at the Scipione Maffei Secondary School in Verona, happened to come to Florence. Having had the pleasure, on that occasion, of hosting him at my home, it seemed to me an opportune momement to ask him his refined opinion of my culinary work. Alas! After examining the work, and with it my humble efforts of many years, he passed the terrible sentence: This book will have little success.

Dismayed but not entirely convinced by his opinion, I was pricked by the desire to appeal to the public, and thus decided to turn, for publication, to a well-known Florentine publishing house. I enjoyed what could be described as friendly relations with the proprietors of this house since the time, some years back, when I had spent a considerable sum of money on various publications of mine. Indeed, to encourage these gentlemen, I proposed that we make the undertaking a partnership; and so that they might give the matter due consideration, after having shown them the manuscript, I also wished them to have a real sampling of my cooking.  Thus I invited them one day to dinner, the results of which appeared satisfying both to them and to the fellow-guests I had invited to keep them good company.

My enticements were in vain, however, for after much thought and shilly-shallying on the matter, one of them said to me: “I’m terribly sorry, but only if your work had been written by Doney could be talk about it seriously.” [Doney was the owner of a famous restaurant in Florence at the time.] “If it had been written by Doney,” I replied, “probably no one would understand a thing in it, which was precisely the case in that large tome, The King of Cooks. With my Manual, on the other hand, one need only know how to hold a wooden spoon to work something out.”

It should be noted here that publishers generally care not a whit whether a book is good or bad, useful or harmful. For them it need only bear a well-known name on the cover, so that they might sell it with ease; a famous name serves to give it a push, and on the wings of its guidance it may then soar to great heights.

Thus having to start all over again, I went in search of a less demanding entrepreneur. Knowing by reputation an important Milanese publishing house, I turned to them, since, as they claimed to print omnia generis musicorum [“all kinds of music”] I thought that amidst that hodgepodge they might find a small place for my modest work. Before long came the humiliating and ever so brusque reply: We do not deal in cookbooks.

Let us have done, I told myself, with begging others for help, and publish the book at our own risk and peril. And so I hired the Florentine typographer Salvadore Landi to print the book. Yet as I was negotiating the terms of our agreement, I had the idea to offer the book to yet another large publisher, better suited to publication of this sort. Truth be told, I found him better disposed than any of the others; but on what conditions, alas! Two hundred lire for the work, and surrender all royalties! May this, and the others’ reluctance, stand as proof of the discredit into which cookbooks had fallen in Italy.

At this humiliating proposal I exploded in a fit of rage, which I need not repeat here, and decided to take my changes and publish entirely at my own expense. Discouraged as I was, however, and to prevent an utter fiasco, I had only a thousand copies printed. Having sent a copy of my work to a Rome magazine to which I subscribed, not only was it not accorded the few words of praise and criticism promised in a notice for all books sent to said magazine as gifts; it was actually listed in the rubric of books received, with a mistake in the title!

Finally, after so many setbacks, a man of genius suddenly appeared and took up my cause. Professor Paolo Mantegazza, with that quick and ready wit that is his trademark, immediately recognized that my work indeed had some merit and might be of use to families. Congratulating me for my work, he said: “With this book you have done a good deed; may it have a thousand editions.” “Too many,” said I. “I would be happy with two.” Later, to my great astonishment and surprise, he praised the book and recommended it to the audience at two of his lectures.

At this point I began to take heart and…the book was beginning to have a measure of success, however limited at first. When the first edition sold out, with some hesitation—since I still could scarcely believe my good fortune—I began the second printing, also of only a thousand copies. As this sold more quickly than the previous one, it gave me the courage to undertake a third one, of two thousand copies, and then a fourth and fifth, of three thousand each. These were then followed, at relatively brief intervals, by six other editions of four thousand copies each. Finally, seeing that as my manual aged, it only seemed to gain favor, the demand for it only became greater and greater, I decided to increase the print runs of the next three editions to six thousand copies each.

52,000 copies have thus far seen the light of day, many of them supplemented with new recipes (for cooking is an inexhaustible art). All of which is reassuring to me, especially as the book buyers also include learned and illustrious people.

But let me tell you, and I say this reluctantly, that with our century tending toward materialism and life’s enjoyments, the day shall soon come when writings of this sort, which delight the mind and nourish the body, will be more widely sought and read than the works of great scientists, which are of much greater value to humanity.