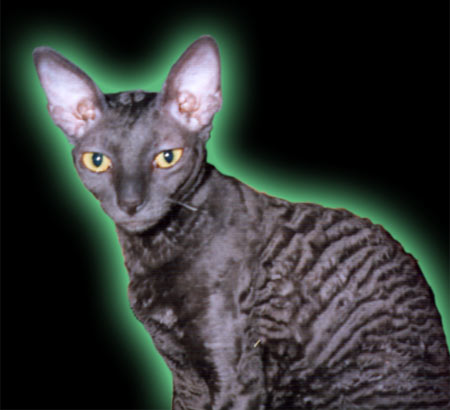 Roswell is by far the most interesting cat I’ve ever lived with. She is of the Cornish rex persuasion with a coat that feels like crushed velvet. So named by Mary Jane because she resembled an alien when she was a big-eyed kitten, Rozzie is nearly 15 years old. She is just as wacked out now as she was when I flew to Houston to pick her up from a breeder. Suddenly, for no reason at all, she becomes a kitten again and goes running around the house bouncing off the walls. She is very demanding about her water fetish, constantly yelling at me to turn on the faucet so she can lick from it. She truly loves showering with me in the morning and hops right into the tub, but she wants me to drizzle water on her head with my hand. She tells me when, in her opinion, there are not enough little nuggets in her food bowl. My good friend Harald was so taken with her when he and Renate visited our house that he took the photo above and then enhanced her portrait with an alien glow. Rozzie tolerates Jagger, our Doberman, and sometimes will tease him into chasing her. He never catches her because she’s too clever for him. She comes when she’s called, just like he does. Maybe she should have her own Facebook page!