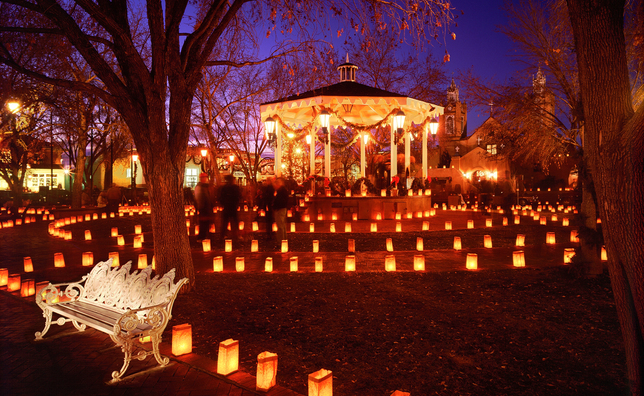 If you drive around Albuquerque on Christmas Eve, you will see thousands of luminarias, little translucent bags weighted down by sand with a lighted candle inside. As Fiery Foods Central food editor Nancy Gerlach writes in her article “Christmas Eve Dishes from New Mexico,” “The tradition of lighting small bonfires, called luminarias, on La Noche Buena was brought from Spain to Old Mexico in the 16th century by Franciscan monks. They were set alongside roads and churchyards to guide people to Midnight Mass on Christmas Eve. This custom then traveled northward with the Spanish into what was to become New Mexico. Here the crisscross fires of pinon wood came to symbolize lighting the Christ child’s way on December 24th. So how did luminarias go from being small bonfires to lights in small paper bags?” Find out in her article. Other Christmas articles you may be interested in are “Red and Green for the Holidays,” “Southwestern Vegetarian Fiesta,” and “Spicy Drinks for New Year’s.”