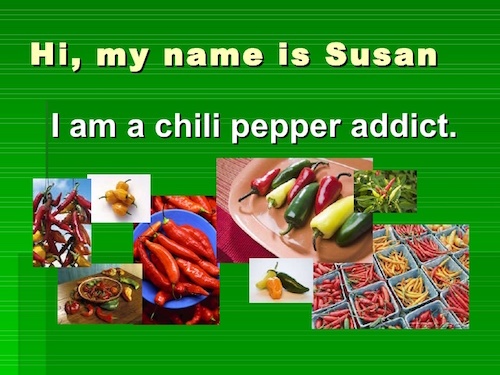 The power of chiles is enough to inspire mythology and folk tales, so it is not surprising that some people believe in its ability to control our minds–or at least our bodies. While it is true that many chile lovers exhibit distinctly druggie habits–we’ve seen people who always travel with a stash of hot sauce, Texans who carry tiny chilipiquin pods in silver snuff boxes, and Californians who indulge in the “pink fix,” which is chile powder mixed with cocaine–chile is not a truly addicting substance.

According to Paul Rozin, Ph.D., a psychologist at the University of Pennsylvania who has done extensive research on the acquisition of chile preference, chile does not meet the criteria for true physical addition, which involves the following symptoms:

Rozin also says that people who do not like chile do not reverse their preference as the negative taste of chile wears off (which is what happens with addictive substances such as alcohol and nicotine), and conversely, there is no evidence that the preference for chile wears off, even after long periods (weeks to years) of not eating it. Former smokers, for instance, can become ill if they try a cigarette after having not smoked for a certain amount of time.

Additionally, a study at Duke University Medical Center found that in smaller doses, capsaicin and nicotine induce some of the same physiological responses which include irritation, secretion, sneezing, vasodilation, coughing, and peptide release; however in larger, injected doses, capsaicin destroys many of the neurons containing its receptors, while nicotine actually increases the number of nicotine acetylcholine receptor. What this means is that large doses of capsaicin result in the body becoming less responsive to capsaicin, but that large doses of nicotine cause the body to become more responsive to nicotine.

While people definitely do not develop a physical addiction, they do become habituated to chiles because of their flavor, their stimulating properties, and their healthfulness. In his 1980 book, The Marriage of the Sun and Moon, Dr. Andrew Weil related a story from Santha Rama Rau’s book, The Cooking of India, where an Indian woman visiting London became ill from the bland food and craved chiles so much that she poured three-quarters of a bottle of Tabasco® sauce, plus sixteen red-hot South American chiles over her omelet before she was satisfied.

“We need a fix of red or green chile with a side order of endorphins,” said Dr. Frank Etscorn, then an experimental psychologist at New Mexico Institute of Mining and Technology in Socorro, and inventor of the nicotine patch, in a 1990 article for the Albuquerque Journal. “We get slightly strung out on endorphins, but it’s no big deal. That year he posed a theory that the warm afterglow and the constant craving for chile are due to capsaicin triggering the release of the body’s natural painkillers called endorphins, which have been called “the body’s natural opiates,” are the cause of the so-called runner’s high, and are capable of turning a painful experience into a pleasurable one.