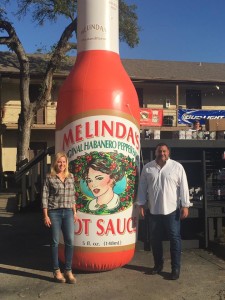 In 1989, I was in my third year as editor of Chile Pepper magazine, the hottest pepper in the world was thought to the habanero, and Greg and David Figueroa launched Melinda’s Habanero Pepper Sauce. It was inevitable that the two entities would promote each other and for years the magazine featured the habanero in articles and recipes, and Melinda’s advertised their habanero sauces and exhibited in our National Fiery Foods and Barbecue Show. With the country now crazy about the habanero, I coauthored The Habanero Cookbook with Nancy Gerlach that was published in 1995. Now, twenty-seven years after our initial collaborations, both Melinda’s and Chile Pepper are sponsors of our upcoming show! It will be quite a reunion.  And how did the Melinda’s brand come about? The Figueroa Brothers put it this way:

Melinda’s hot pepper sauces were created from a passion for exotic food and international flavor. The Figueroa brothers grew up in New Orleans, a culinary melting pot of Caribbean, African and European cuisines. Habanero peppers always grew in their garden and their home was always filled with the heavenly aromas of Caribbean, Latin America and Mediterranean spices.  Their Mother is a gourmet cook and their father loves it spicy.  He always had a fresh habanero and onion sauce handy to add some more heat to their family meals.
As adults, they traveled the globe, eager to experience new ideas and to be inspired by new ingredients. It wasn’t long before they decided to share their passion with the world. And in 1989, Melinda’s hot pepper sauces set the culinary world on fire! It was the first brand to truly balance fire and flavor. The first brand to introduce America to the habanero chile pepper, and the first to introduce a pepper sauce with a variety of heat levels. The Figueroa Brothers early success was recognized locally and nationally in the press and by October 1992, at the ages of 24 and 25, they were featured in Entrepreneur Magazine 40 under 40 issue.  Dave DeWitt, known as the “Pope of Peppers” for his knowledge of all things spicy said “the Figueroa Brothers have done more for the promotion of the habanero pepper than any other company.  They made the habanero a household word.”