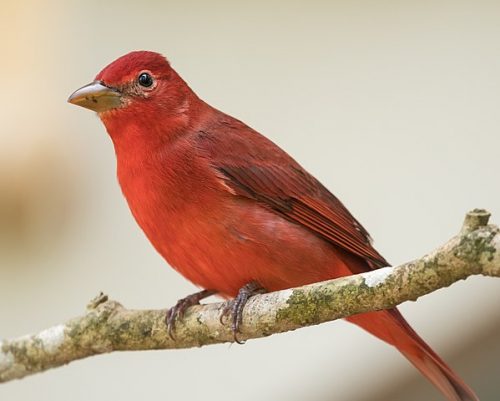 2018 was an excellent year. In the DeWitt-Wilan family, there were no major illnesses but one injury–Mary Jane broke her hip in January, but she has fully recovered. Our business was in a profit and we had great attendance at the 30th annual National Foods & Barbecue Show, and Scovie Awards entries increased over 2017.

I hiked 824 miles in 2018, 98 more than in 2017, and birdwatching was good. Above is a bird I’m seeing more often, a summer tanager–it is so bright you can spot it a quarter mile away. I saw several common black hawks–summer visitors from Mexico, more mockingbirds than I’ve ever seen before, plus a flock of cormorants and a few white-faced ibises. Curiously. sightings of killdeers were way down. Normally I’d have about 60 sighting in a year, but this past year there were only five or six sightings. In my garden, I had great crops of beans and marijuana (yes, I’m licensed by the state to grow it legally) but tomato and chile pepper yields were mediocre. I got a new smoker, a Rattler by Sidewinder Grills, made here in Albuquerque by the same people who manufacture the Disc-Its, and I put it to great use by smoking large quantities of pork ribs and chicken thighs. My big travel news was my trip to Chine in August for a chilli pepper conference (their spelling). I was in the largest city in the world, Chongqin (30 million people) and the chilli capital of China, Zunyi. The people I met were wonderful and I had a great time.

No books of mine were published in 2018, but that didn’t mean I wasn’t writing them. Look for more titles from me in 2019. As far as reading goes, 2018 was a great year for natural history books, and my two favorites were The Eye of the Shoal by Helen Scales and The Revolutionary Genius of Plants, by Stefano Mancuso. Also excellent were The Feather Thief, by Kirk Wallace Johnson and End of the Megafauna, by Ross D.E. MacPhee. For war history, the best book I read was Rampage: MacArthur, Yamashita, and the Battle for Manila, despite the fact it was overly gory. For fiction, the best books I read were Magpie Murders, by Anthony Horowitz (and his equally good The Word is Murder), and Dark Sacred Night, by Michael Connelly.

And now I’m wishing everyone happy new year and a wonderful 2019.