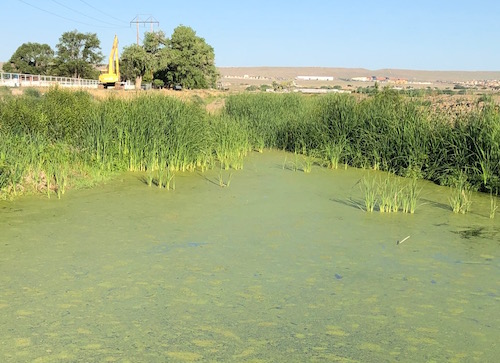 In a word, duckweed. That’s not all they eat because they feast on quite a variety of aquatic plants. The scene above on the Los Padillas Drain in the South Valley of Albuquerque looks like algae but when you look at it closely, you will see this: 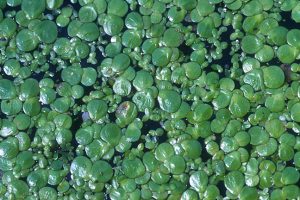 It is a perennial aquatic plant usually growing in dense colonies, forming a mat on the water surface. Each plant is a smooth, round, flat disc 0.5 to 1.0 cm wide. It produces several minute roots. Duckweed is an important high-protein food source for waterfowl. The tiny plants provide cover for the fry of many aquatic species of insects and fish. The plants are used as shelter by pond-water species such as bullfrogs and fish such as bluegills.
Duckweed is also eaten by humans in some parts of Southeast Asia. As it contains more protein than soybeans, it is sometimes cited as a significant potential food source. Some initial investigations to what extent duckweed could be introduced in European markets show little consumer objection to the idea.
Duckweed is a good candidate as a biofuel because it grows rapidly, produces five to six times as much starch as corn per unit of area, and does not contribute to global warming. Duckweed removes carbon dioxide from the atmosphere, and it may have value for climate change mitigation. Duckweed also functions as a bioremediator by effectively filtering contaminants such as bacteria, nitrogen, phosphates, and other nutrients from naturally occurring bodies of water, constructed wetlands, and wastewater.
Despite some of these benefits, because duckweed thrives in high-nutrient wetland environments, they can be seen as a nuisance species when conditions allow them to excessively proliferate in environments that are traditionally low in nutrients. This is the case within the Everglades, where surface runoff and agricultural pollution have introduced increased levels of nutrients into an otherwise low-nutrient wetland system, which allows fast growing species such as duckweed to establish themselves, spread, and displace other native species such as sawgrass. And ducks love it!