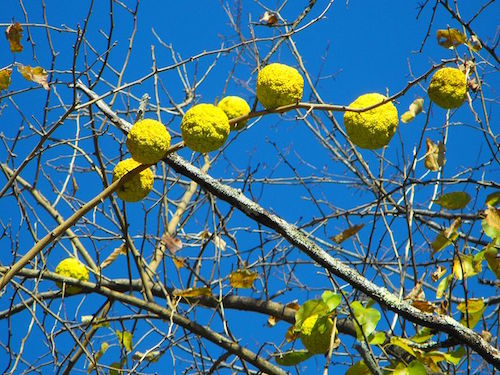 Saturday, November 9, 2019, at 0745, I was walking south along the drain trail on the west side of the Rio Grande where I heard a dog barking. I recognized the bark–it was the Belgian Malinois named Xena I had befriended. I gave her a dog biscuit like I do for so many of my dog friends on my walks and thought I heard a hot air balloon and looked up.  What I saw instead of the balloon is the photo above. What the hell? What fruit the size of grapefruits lives in 50-foot trees in New Mexico? Fortunately, I had a way to find out while still on that trail. I took my iPhone out of my pocket and did a Google search for “tree with large, yellow, lumpy fruits.” The first result was “Osage orange tree.” 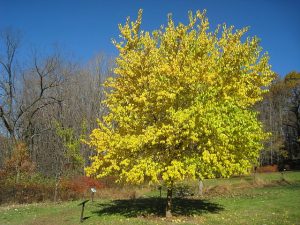 Maclura pomifera in the fall.

Now it certainly didn’t look like a citrus tree and citrus trees can live in New Mexico in pots that can be wintered over in a greenhouse like ours–we have a Meyer lemon tree–but citrus is a tropical tree that can’t live where it freezes. When I got back to the house I started researching the Osage orange that’s also called hedge apple, horse apple, bois d’arc, bodark, monkey ball, bow-wood, yellow-wood, and mock orange. But no matter what you call it, the Osage orange will always be Maclura pomifera.
Wikipedia notes: The earliest account of the tree in the English language was given by William Dunbar, a Scottish explorer, in his narrative of a journey made in 1804 from St. Catherine’s Landing on the Mississippi River to the Ouachita River. It was a curiosity when Meriwether Lewis sent some slips and cuttings to President Jefferson in March 1804. According to Lewis’s letter, the samples were donated by “Mr. Peter Choteau, who resided the greater portion of his time for many years with the Osage Nation.” Those cuttings did not survive, but later the thorny Osage orange tree was widely naturalized throughout the United States.
The trees acquired the name bois d’arc, or “bow-wood” from early French settlers who observed the wood being used for war clubs and bow-making by Native Americans. Meriwether Lewis was told that the people of the Osage Nation, “So much … esteem the wood of this tree for the purpose of making their bows, that they travel many hundreds of miles in quest of it.” The trees are also known as “bodark” or “bodarc” trees, most likely originating from a corruption of “bois d’arc.” The Comanches also used this wood for their bows. It was popular with them because it was strong, flexible and durable and was common along river bottoms of the Comanchería. Some historians believe that the high value this wood had to Native Americans throughout North America for the making of bows, along with its small natural range, contributed to the great wealth of the Spiroan Mississippian [Mound Builder] culture that controlled all the land in which these trees grew. If so, this means that the Mound Builder culture was “selling” a natural resource it controlled, similar to the other resources like turquoise, gold, and obsidian, but with one important difference: sell a branch to make a bow and the branch grows back! 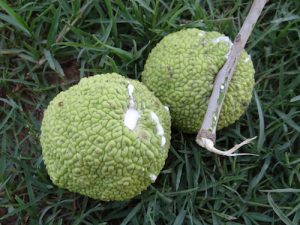 As impressive as the fruits are, they’re inedible. They are filled with the milky sap called latex, similar to what’s in rubber trees and milkweed plants. Osage orange’s pre-Columbian range was largely restricted to a small area in what is now the United States, namely the Red River drainage of Oklahoma, Texas, and Arkansas, as well as the Blackland Prairies and post oak savannas. It has since become widely naturalized in the United States and Ontario, Canada. Osage orange has been planted in all the 48 contiguous states of the United States and in southeastern Canada. 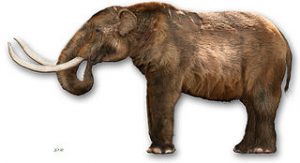 Scientists believe that prior to the Western Hemisphere megafaunal extinctions, the principal animal that ate the fruit of the Osage orange and spread its seeds was the mastodon. With mastodons extinct, the Osage orange became what’s called an anachronistic fruit surviving because of asexual reproduction (“shoots from roots”) and other seed dispersers like horses and mules.