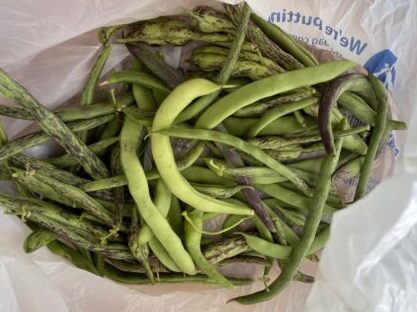 I grow pole beans, but not on poles. Mine climb up a six-foot-tall chainlink fence and the foliage is dense, making it difficult to see the beans I’m trying to pick. But I’m not picking the actual beans, but rather the pods that contain the seeds of the bean plant. The seeds are also called beans, but only in their dried form because in their green form, the whole pods are called “beans.” If you’re picking pole beans and you find a pod that has little or no  green coloration (chlorophyl), that tells

you that the pod should be dried, but not eaten immediately. The dense foliage is actually part of the bean plant’s survival strategy. It makes the immature pod less visible to predators like yours truly, thus increasing the pods’ chances of maturing into dried, fertile seeds, which I will collect and plant next year. Not being sentient, plants can’t have a survival plan. But if they did have one, it would be “grow large and multiply.” That said, I still want a bunch of green beans to eat. Here are two suggestions to maximize your picking: 1) When you get to the end of a row of pole beans, turn around and pick in the opposite direction, and 2) most of the pods will be in the oldest part of the plant, the one-third of the foliage closest to the ground.