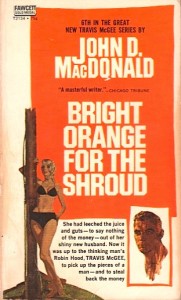 In 2013 I decided to reread all 21 of John D. MacDonald’s Travis McGee books. MacDonald wrote more than 70 novels, and with the possible exception of The Executioners, which was made into the movie Cape Fear, Travis was MacDonald’s most memorable achievement.

Mysteries with a recurrent hero have been around for quite a while. Georges Simeon published 75 novels and 28 short stories featuring Commissaire Maigret, with the first coming out in 1931. Other mystery series also starred policemen of some type, or private eyes, and were usually police procedurals. One famous hero was Simon Templar, The Saint, in the series by Leslie Charteris, and they were not procedurals but rather mystery/adventure stories and probably the precursor to the James Bond books. I still have my collection of Saint novels, about 90 of them–including damned near every title and often the same book with a different title.

I’ve read a lot of these series with recurrent heroes, but I don’t remember one starring a boat bum until MacDonald published the first one starring McGee, The Deep Blue Goodbye, in 1964. I found all the books in various places from Don’s Paperback Exchange here in Albuquerque to Amazon.com, where many were available for one cent plus $3.99 shipping.

I didn’t read the books in the order they were published because I wanted to jump around and see if each one held up on its own without reference to the previous one in the series. All of them were readable, most were still fresh except for technology, there was only one I didn’t like, and that was A Deadly Shade of Gold. It was 434 pages long, dragged, and it was overly complicated. A typical Travis McGee book is 150 to 200 pages shorter, which kept the story moving. There were four titles that I would consider the best, and for anyone who wants to sample a thriller writer in fine style, great plotting, and believable (for the most part) characters, I recommend One Fearful Yellow Eye (1966), Pale Grey for Guilt (1968), The Long Lavender Look (1970), and Cinnamon Skin (1982). All of the Travis McGee books are in print in one format or another, and since they sold about 40 million copies, there are plenty of used ones around.

The cover blurbs accurately portray McGee; “Part rebel, part philosopher,” and “a fearless adventurer, an intrepid investigator, a champion of underdogs, and a rescuer of ladies in distress.”  Change a word or two and that could be Jack Reacher or Elvis Cole, two of my favorite current series heroes. It was good to see McGee and MacDonald holding up so well 29 years after the last one was published in 1984, and I truly enjoyed the experience.

Have I Written Too Many Damn Books?

Research Tricks for the New Era