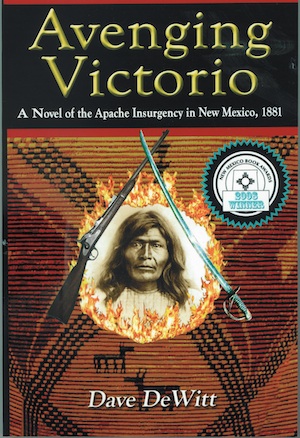 I’m mostly known for writing food history about chile peppers and cookbooks concerning hot and spicy foods, but occasionally I get an idea for a novel and go for it. While working on a travel guide, New Mexico: Discover the Land of Enchantment, I became fascinated by New Mexico in the early 1880s and its incredible cast of characters. While Lew Wallace (author of Ben Hur) was territorial governor, Colonel Edward T. Hatch (the chile town of Hatch is named for him) was futilely chasing the great Apache war chief Victorio, and Billy the Kid was killing people in the southern part of the territory. After Victorio was killed in Mexico, the elder war chief Nana, Victorio’s second in command, then in his late ‘70s, led a vengeance raid through New Mexico, slaughtering men, women, and children and evading Hatch’s cavalry and his Buffalo Soldiers yet again. In fact, in the true history, the Indians won! It was too good a story to pass up. It took me five years to research and write Avenging Victorio, but I loved every minute of it.

“DeWitt’s storytelling weaves together the perspectives of the opposing sides, providing insight into the events of the period, and the personalities, motivations and cultural differences of the key players in the conflict. … dynamic narrative format builds suspense as the reader eagerly awaits the discovery of which strategies will ultimately accomplish each side’s goal—defeating the enemy… creates a kinship between a contemporary reader and the usually intangible characters of New Mexico’s past.” — New Mexico Magazine