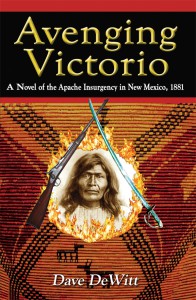 A rag-tag group of Apache warriors, led by an elderly man in his late seventies, took on the U.S. Army’s Ninth Cavalry in revenge for the death of the great Apache war chief Victorio. Using guerilla warfare, they led raids through New Mexico, slaughtering men, women, and children and evading the Cavalry and the Buffalo Soldiers. In the end, they won! Interesting historical characters abound. Billy the Kid was killing people in the southern part of the territory. The New Mexico Territory was governed by Lew Wallace (author of Ben-Hur and territorial governor). Colonel Edward T. Hatch (the chile town of Hatch is named for him) was in charge of the U.S. Army’s Ninth Cavalry. And the great Apache war chief Victorio had been killed by the Mexican Army. After Victorio (a supposed treasure trove is named after him) was killed, the elder war chief Nana led the Apache to victory.

“Dave DeWitt enthralls us with a tale that is at once fast paced, exciting, and full of interesting historical lore. A thoroughly engrossing tale, that winds around New Mexico like the Apaches who used to roam these lands, and embodies the true spirit of New Mexico culture. It is hard to describe all the myriad details that have been intricately woven into this well researched book, there are so many included. For historical value alone, this book is a winner, yet it will intrigue you with its tales, its characters, and its sense of location, pulling you deeper and deeper into its depths, until you find yourself fully absorbed and engrossed in the territorial history of the late 1800s, never wanting it to end. I have never enjoyed a historical novel as much as I did this one. It is not at all what you would expect history to be, and is written unlike other history tales, not by the victors, but by all who made the history, no matter which side they were on, are given a voice in this book. This is a true historical account of the Apache Insurgency in New Mexico in 1881.”  –DawnEagle Summers, BellaOnline.com

“DeWitt superbly portrays the cultural differences and motivations between the Apaches and the U. S. Army commanders, making it hard to sympathize completely with either camp. No matter the side chosen, the promise of upcoming battle grows like a hunger, each further encounter eagerly anticipated, and the intriguing cast of real-life personages, including Colonel Edward T. Hatch, Kaytennae, Lieutenant John Guilfoyle, Geronimo, and the Buffalo Soldiers of the 9th Calvary, brings this historical episode to vibrant life.” — David Corwell, POSH New Mexico (Fall 2007)

I’m a Novelist, Too