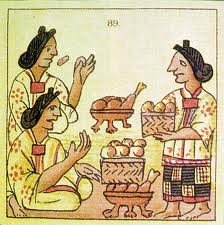 This article is taken from A Popular History of the Mexican People, by Hubert Howe Bancroft, written in 1887. “The fondness of the Aztecs for feasts and amusements appears to have extended through all ranks of society. Every man feasted his neighbor, and was himself feasted in turn. Beans, the etl of the Aztecs, and the principal ingredient in the frijoles of the Spaniards, were boiled, when green, in the pod, and when dry were also boiled. Chilli, chile, or pepper was eaten raw, whether green or dry, and a sauce made from it formed a part of the seasoning of almost every Nahua dish. Fish, and fowl, fresh or salted, were roasted, stewed, and boiled with fat, and seasoned with chile and tomatl, or tomatoes. Fruits were, for the most part, eaten raw; but some, as the plantain and banana, were roasted or stewed.” Read the full text of “Dining with the Aztecs,” here.