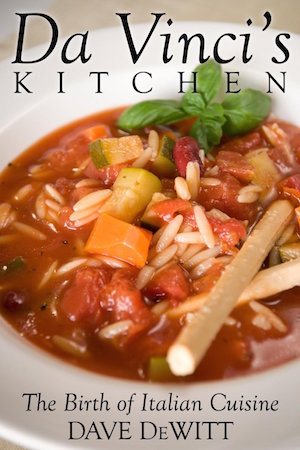 My first food history title was Da Vinci’s Kitchen: The Birth of Italian Cuisine, and it was published in twelve countries besides the U.S. It’s just been released in a Kindle edition for the very reasonable price of $3.99. Here’s a description of the book:

In his time, Leonardo Da Vinci was more famous for producing lavish banquets and spectacular theatrical productions than he was for his art. Ironically, he was a vegetarian who did not partake of the feasts. is Da Vinci’s Kitchen is a fascinating account of Italian cuisine from Da Vinci’s Renaissance to modern times, with original recipes from the early masters of cooking, and it explores the history and relevance of Italian cuisine.
Chapters include:
–Regional Cuisines That Survived the Wars
–The First Superstar Chefs
–Invasion of the Foreign Crops
–How to Cook for the Pope
–Da Vinci’s Kitchen
–Fantastic Feasts
–A Cuisine Triumphant

Science in the Kitchen and the Art of Eating Well