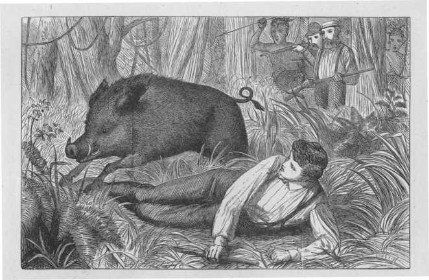 Here is a collection of quotes on Jamaican hogs and jerk pork from 1672 to 1900, including this one:

[The following excerpt is from the 1816 journal of Matthew Lewis, author of The Monk, who died at sea on the voyage homewards from the West Indies in the year 1818.]

“Several gentlemen of the county dined with me to-day. We had at dinner a land-tortoise and a barbecued pig, two of the best and richest dishes that I ever tasted, the latter, in particular; it was dressed in the true maroon fashion, being placed on a barbecue (a frame of wicker-work, through whose interstices the steam can ascend), filled with peppers and spices of the highest flavour, wrapped in plantain leaves, and then buried in a hole filled with hot stones, by whose vapour it is baked, no particle of the juice being thus suffered to evaporate. I have eaten several other good Jamaica dishes, but none so excellent as this, a large portion of which was transferred to the most infirm patients in the hospital.” Read the entire article here.