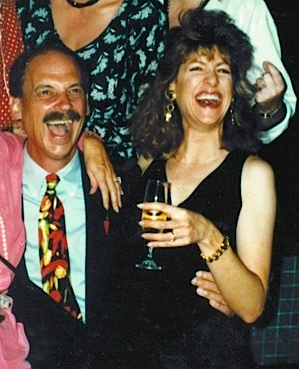 Ilene was one of our top sales people when I was the editor of Chile Pepper magazine. We partied a lot in those days, as you can tell from this shot taken in 1996. That’s me on the left. Ilene now lives in Portand with her husband Milt McConnell, where she’s been a witness to some remarkable changes in how people are partying there. She gave me permission to publish what follows.

Note: I wrote this yesterday, the day pot became legal in Oregon, but spaced out and forgot to send it.  Can’t imagine why.

I am stoned right now.  OK, maybe not stoned, but very high.  Which is the only truly appropriate way to celebrate that fact that as of today, marijuana  is now legal for recreational use in the state of Oregon. Prohibition is dead!  And I am totally ON IT, dude!

The countdown clock to this historic day has been ticking since last fall, when the citizens of Oregon voted to legalize their favorite recreational drug. Oregon was the 4th state in the U.S. to do so.  Starting today, Oregonians can use marijuana freely on private property.  We are allowed to possess up to a 1/2 pound at home and up to one ounce in public.  We can grow up to 4 plants at home, which would probably yield about a 1/2 pound of pot, depending on how green your thumb is.   What we CAN’T do is smoke weed in a public place, take it out of the state, or drive under the influence.  The other big thing we can’t do is BUY or SELL pot — yet.  Our state government is still working on the laws that will be set up to regulate retail establishments, which will most likely be up and running by 2016.  This makes for somewhat of an ironic situation — pot is legal here, but there’s nowhere to buy it.  However, it is legal to share or give away recreational marijuana.  Which is what prompted an event here in Portland that helped usher in the new law.

At 11:30pm last night, 30 minutes before the new law went into effect, a large crowd of people gathered on the Burnside Bridge, a major Willamette River crossing here in Portland, for a “weed and seed” giveaway organized by the Portland chapter of NORML (National Organization for the Reform of Marijuana Laws.)  Organizers had expected a few hundred people to show up, but instead, 5,000 did, spilling onto the bridge and yelling, “Weed! We want weed!” At midnight, all adults 21 and over were given free weed and free seeds to grow their own plants, courtesy of local medical marijuana providers and pot activists. And then, although it’s technically illegal to smoke in public, all 5,000 people lit up, and the Burnside Bridge became a huge smoke fest.  Amazingly, not one of those 5000 people blatantly breaking the brand new law was arrested.  A local reporter said she was there for over an hour never even saw a cop.  Here in laissez-faire Portland, police don’t like to interfere.  They were probably busy firing up their bongs in the privacy of their own homes! 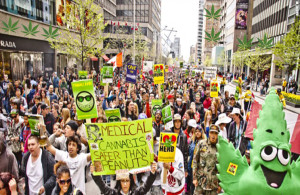 For all the people who missed that event, there will be another cannabis legalization celebration happening this Friday, called “Weed the People”, which is being billed as “Oregon’s first public cannabis sampling event.”  It will be a 7-hour party where local growers will be sharing and sampling their cannabis crops with the general public. Each attendee will be able to legally sample or take home up to 7 grams of pot.  In additional to growers, the celebration will feature paraphernalia vendors, cannabis-friendly companies, vaping stations, food vendors (natch!), music, and gift bags.  Sadly, I will miss this exciting event that promotes marijuana, as I will be at work that day promoting America’s OTHER favorite recreational drug, alcohol.

I’m hoping I will be available for The Cannabis Cup, a massive marijuana event hosted by High Times, that will be held for the first time in Portland later this year.  The Cannabis Cup is a convention and trade show for marijuana enthusiasts.  Businesses from all over come to exhibit their wares, and the convention also features lectures, panels and concerts.  But the biggest draw is the famous free samples given out at the event.  Portland’s first-ever Cannabis Cup will join the 6 other Cups that are held in marijuana-friendly places like Colorado, Washington state, and Amsterdam.

The timing of the inception of this law couldn’t have been more perfect.  What better a time to legalize pot than right before a holiday weekend, one where massive partying is on everyone’s to-do list?  You gotta love Oregon for that.  And, if after reading this, you suddenly realize that perhaps Oregon does indeed have something to to offer you, you’d better make your reservations to come visit soon.  Although there are no recreational dispensaries here yet, there is no lack of week in this city, judging by the familiar aroma I smell every time I go out for a walk.  Better make your plans soon though.  We are expecting an uptick in bookings here at the Milton Hilton Northwest, and have hired additional reservation agents who are standing by to take your calls.

Gotta run now.  I feel a severe case of the munchies coming on, and I sense that there might be a VooDoo Donut, or two, or seven, in my immediate future.  Peace out, man.

P.S. For those of you who live where it’s legal to grow marijuana, I highly recommend Dave’s book! 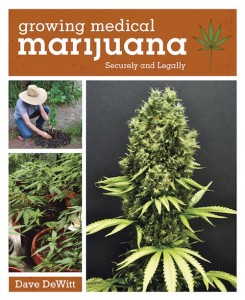