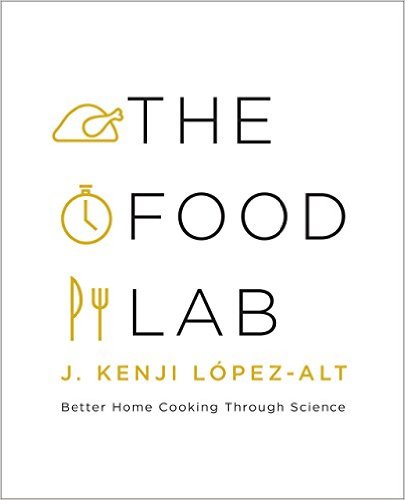 Don’t be misled by the boring cover of this book on the science of cooking and how to use it to become a better home chef. The cover is the only boring thing about this incredible, 960-page book that shatters many of the cooking myths we have grown up with. e Like salting, for example. I followed my mother’s lead and refrained from salting anything until it was on the table. This is because I didn’t understand that salting is much more that adding sodium chloride to food. For example if you salt a steak forty-five minutes before grilling it, the salt will break down protein and help the steak retain its juices, and the result is a tenderer and juicier finished piece of meat. And that finished steak is not too salty. Suppose you are cooking broccoli in boiling water. No matter what the amount of broccoli you’re boiling or blanching, always use your largest pot. Why? Because you never want the heat to drop below 170 degrees because that temp is when chlorophyllase is produced, and that chemical attacks the chlorophyl in bright green vegetables and turns them gray. A large pot holds more hot water and retains much more of its heat when the vegetables are added. So this book is about using science–mostly chemistry–to make better food. The author, J. Kenji Lopez-Alt, used to work at America’s Test Kitchen, and each recipe in this book has been tasted many, many times. He tested one chicken recipe 50 times. 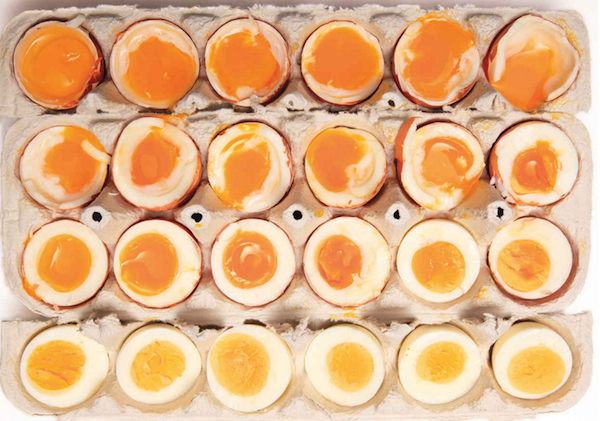 One of Kenji’s experiments: Eggs boiled for 30-second intervals from 0 to 12 minutes.

I give this book a grade of  “A” for all the experiments Kenji did to prove his theories, and in terms of education, it’s the best cookbook I own.