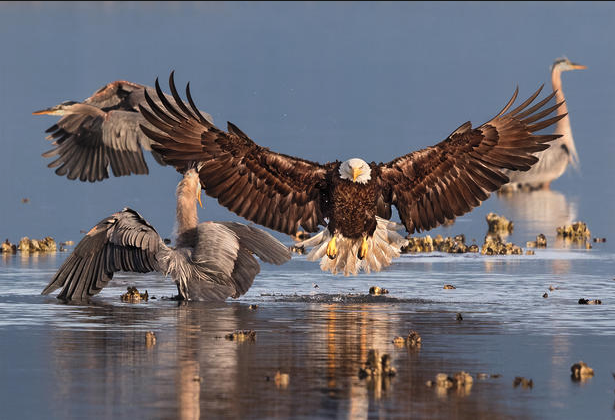 The National Audubon Society announced the winners of its 2016 Photography Awards on April 21, 2016. Here is Bonnie Block’s Grand Prize-winning shot of this bald eagle and great blue heron encounter in Seabeck, Washington. She won $5,000 for this photo! Bonnie explained, “Seabeck is a small town on the edge of the Hood Canal in western Washington. In early summer great blue herons and bald eagles converge here to feast on fish that get trapped in the exposed oyster beds at low tide. While both species catch their own fish, the eagles are especially fond of harassing the herons for their catch. They charge at the herons, which at times release their prey with a loud squawk, dropping the fish back into the water. Though they’re not always successful, the eagles seem to take pleasure in trying to steal a meal.”