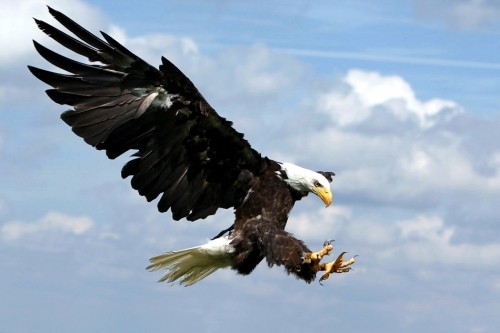 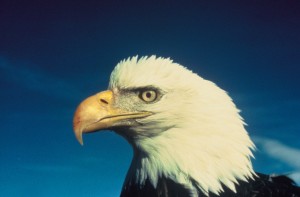 Less that a half-hour ago, I was driving across the Rio Bravo bridge, and there it was against the very blue sky–a bald eagle flying south down the center of the Rio Grande. It was an awesome sighting that only happens once every five years or so. Raptors of New Mexico reports that most bald eagles are seen in the winter in New Mexico, but there are some breeding pairs during the summer that make nests weighing up to 1,000 pounds. Their diet consists of 56% fish, 28% birds (mostly ducks), 14% mammals, and 2% other. In the Southwest, due to the lack of bodies of water, the percentages change and the eagles’ diet is only 25% fish, with mammals taking up the slack at 53%, and those are mostly prairie dogs. Bald eagles are notorious thieves, often stealing fish from ospreys (which also fly the Rio Grande), and they also scavenge like a turkey vulture. No wonder Benjamin Franklin had this to say: “For my own part I wish the Bald Eagle had not been chosen the Representative of our Country. He is a Bird of bad moral Character. He does not get his Living honestly. You may have seen him perched on some dead Tree near the River, where, too lazy to fish for himself, he watches the Labour of the Fishing Hawk [osprey]; and when that diligent Bird has at length taken a Fish, and is bearing it to his Nest for the Support of his Mate and young Ones, the Bald Eagle pursues him and takes it from him.”