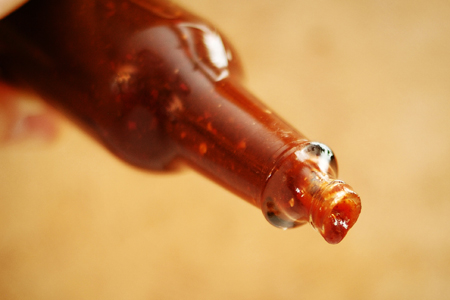 People still ask me questions! Despite my chile pepper FAQ, here, I still answer a lot of questions from consumers and industry people alike. Jean-Luc Leger, from somewhere in Canada, asks a very interesting question: “I bought two of your books on peppers (very interesting). In one, you mention something about vitamin A being very “persistent” and present in hot peppers in general. Why do the hot sauces bottles labels always say that Vitamin A content is 0% ? Thank You.”
Jean-Luc: Your hot sauce sample is not large enough to make such a statement that hot sauce bottle labels “always” state that Vitamin A is 0%. When chile peppers are green, vitamin C is is present in large amounts; when peppers turn red, vitamin C diminishes and is replaced by vitamin A in large amounts. However, when a hot sauce is made, this vitamin A is not always transferred into the sauce for a number of reasons, including:
–If the chile pepper used is green, very little, if any vitamin A would be transferred.
–If the chile pepper is red but is an habanero or a superhot pepper, the amount of the pepper used would be too small to register vitamin A in the resulting sauce.
A quick search of the hot sauces in my cupboard and refrigerator revealed the following:
–El Pinto Medium Salsa, which lists tomatoes as its first ingredient, has 2% vitamin A.
–Spice Runner’s Hot Lava Five-Pepper Blend, which lists red jalapeños as its first ingredient has 4% vitamin A.
–Rojo Hatchanero, made by Hotline Pepper Products, which lists New Mexico chiles and habaneros as its 3rd and 4th ingredients, has 10% vitamin A.
–And Chef Nation’s Enchilada Sauce, which lists tomatoes as its first ingredient and red guajillo peppers as its 3rd ingredient, has a whopping 35% vitamin A.

I hope this answers your question!