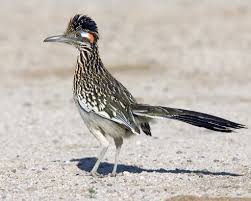 Recently, a roadrunner I have named Paisano has started living in our front yard. I was putting water in the bird bath and Paisano ran up to it, stopped at the base of it, two feet from my feet and looked up at me as if to say, “Aren’t you done yet? I’m ready for my bath.” Later, I saw him bathing, and then he jumped down and started hunting for whiptail lizards, of which we have plenty. All of this was charming, but with one serious drawback. Our 100-pound Doberman, Jagger Henley, hates other animals that invade our yard, including cats, small dogs, and large birds. His barks inside our house are louder than a sonic boom. So I decided to drive the roadrunner off. He was on the left side of the yard so I went over to him yelling and waving my arms. Normally, that will scare off any bird, but not Paisano. He ran over to the right side of the yard and hid behind a cholla cactus. I went over there and he ran back to the left side of the year. This bird, a young male born this summer, was playing with me! Okay, I thought, I’ll hose him out of here. I put the sprayer on the hose on direct stream, turned the water on full blast, and hit Paisano with it directly. He hid behind a sagebrush but did not leave the yard. I ran him down and squirted him again, but he seemed to enjoy it. I was about to get my .22 pistol and shoot him when I remembered that he was the state bird of New Mexico and therefore protected. (I’m just kidding–I couldn’t hurt a bird.) So after four days, he’s still here. Well, when the lizards go extinct in our yard, maybe he’ll move on. Or I’ll have to buy a bag of Purina Roadrunner Chow.