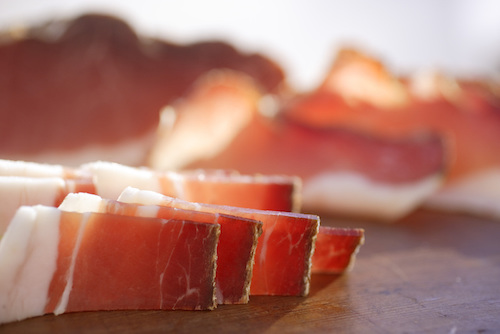 Did Ötzi start the recent craze for bacon? Ötzi is the name given to a 5,300-year-old mummy found frozen in a European glacier in 1991. H was discovered by two German hikers in 1991 in the Ötztal Alps, 10,500 feet above sea level. Ötzi was hiking across the Alps between modern-day Italy and Austria when he was killed by an arrow. He was between 40 and 50 years old.

Researchers tested the contents of Ötzi’s stomach after the body was thawed. Mummy specialist Albert Zink from the European Academy of Bolzano said he analyzed the nanostructure of meat fibers from a mountain goat found in Ötzi’s stomach. Specifically, that the the meat was raw and had been dry-cured, but not cooked or grilled, which would have weakened the fibers. “It seems probable that his last meal was very fatty, dried meat–perhaps a type of Stone Age speck or bacon,” Zink said. As Ötzi had hiked down from the South Tyrolean side of the Alps, it’s likely his speck came from there. Speck is air-dried meat, usually from a pig or cow. Speck is sometimes salted, sometimes smoked, and it’s main quality comes from an abundance of fat. It is similar to prosciutto from Italy, carne seca (“dried meat”) in Spain and Mexico, and jerky in the U.S.

As part of their latest discoveries, Zink’s team also found that Ötzi had an ulcer-inducing bacteria and may have suffered from stomach aches.

The Love of Bacon Carried Too Far

99+1 Taps of Beer on the Wall at Matanza