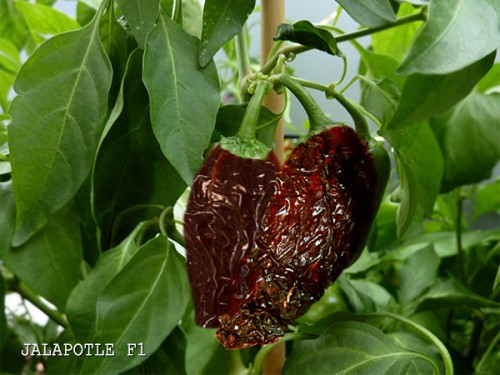 A chipotle is a smoke-dried mature red Jalapeño pepper that is used in Mexican, TexMex and Southwestern cuisines. The name comes from the Nahuatl (Aztec language) word “chilpoctli”, meaning “smoked chili”. Because Jalapeños have a very thick mesocarp (flesh), they don’t air-dry well. Therefore the red mature pods are traditionally smoke-dried over mesquite fire, a time-consuming process that also requires specialized smoking skills.

All this could change with a new Jalapeño cultivar, named Jalapotle. The new variety promises to be a significant time and energy saver, as no smoking is required to get the valued smoky pods. Some of the fruits’ internal glands that normally produce capsaicin, the chemical compound that makes chiles hot, were genetically reprogrammed to mimic the organic olfactory complex found in liquid smoke. “Once we had determined the molecular structure of the smoky flavor in liquid smoke using high-performance liquid chromatography, we only needed to insert the corresponding code into the chile pepper’s DNA,” said Dr. Sandro Gonzales, lead chile breeder at Lirpa Loof Labs of the University of California at Davis. “The smoky flavor develops during maturation of the fruit. And shortly after they turn red, the pods start to wrinkle and change their color to brown, giving them not only the flavor, but also the look of traditional chipotles.”

Jalapotles can be used in barbecue sauces, chipotle in adobo sauce, and other specialties right off the plant with no processing needed. Due to the proprietary breeding process, seeds are only available as hybrids (F1). “They are the very first GMO chiles ever developed,” Dr. Gonzales noted, “and more information will be forthcoming soon.”

The Revival of a Barrackapore