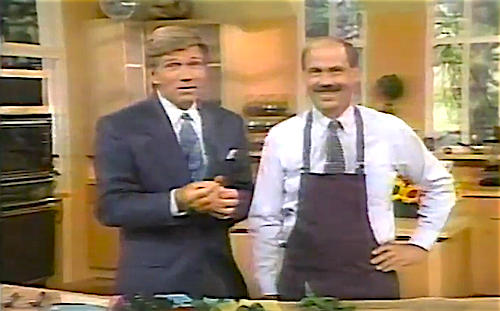 I regard myself as a semi-celebrity because I’m quite famous in the very narrow niche that is chile peppers and fiery foods. That’s not quite enough to place me on the level of Brad Pitt, but there have been occasions when I’ve been treated like him, especially in Italy, where the newspapers called me Il Papa del Peperoncini (guess what that means), and I’ve been interviewed by the Italian national TV station. I was the guest of honor at the 2010 Peperoncino Festival in Diamante, attended over five days by 150,000 foodies, and I’ve given a talk, with a translator, at the the Accademia Barilla, the famous Italian food history center and library in Parma.

So I’m a little blasé when I meet celebrities and treat them as equals. When I interviewed Alice Cooper back in the seventies, we discussed deep sea fishing, not music. Bobby Flay and I talked about demanding schedules and the necessity to constantly revive “to do” lists over a beer after I appeared on one of his shows. On the Today Show, Bryant Gumbel and I discussed, off-camera, his experiences eating peppers while growing up in New Orleans. 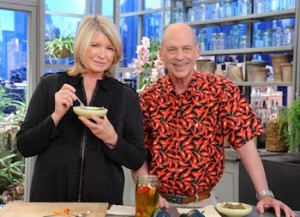 After my appearance on The Martha Stewart Show in 2011, all my female friends (okay, some of them) wanted to know what Martha was like. I told them that she was charming, very professional, but a lousy kisser. I don’t think they believed me. My most agonizing semi-celebrity experience was on the Gary Collins Show with the late Gary Collins (see above image) when my cooking demonstration had to follow the Parents of Murdered Children. Everyone on the set was in tears—the camera operators, the directors, the stagehands—but not me or Gary. During the break, he apologized to me for having to follow the sob-fest, so I asked him if I should I open my segment with “Enough about murdered children! Let’s cook some spicy shrimp!” He replied, “Not enough time, Dave. Your segment’s been cut from four minutes to two.” But I pulled it off, and when he asked me on-camera what would happen to him if he ate the habanero I gave him, my comeback was: “You would lose your voice, I would have to take over the show, and maybe even get your job.” He laughed, and it was genuine.

It’s tough work being a semi-celebrity….

No, This is Not the Surface of Pluto in Color