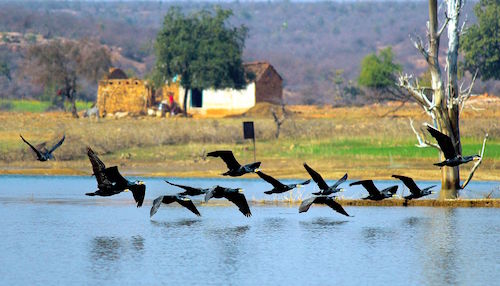 When you think of Albuquerque birds, cormorants don’t come to mind, but I see one every two or three years. Not only is Albuquerque part of the Central Migratory Bird Flyway, but the Rio Grande runs right through the middle of the city; so yes, we have water and fish. But today I saw a flock of about ten of these birds that were flying considerably higher than the birds shown above. They were double-crested cormorants, which are uncommon but still are found year-round in the Middle Rio Grande, roughly from Cochiti Lake to the Bosque del Apache National Wildlife Refuge. 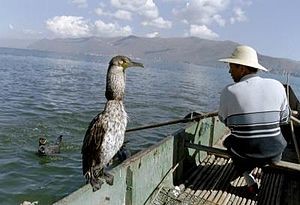 In China, Korea, Japan and other parts of Asia, cormorants are tamed and are used as avian fishers. Wikipedia notes, “To control the birds, the fishermen tie a snare near the base of the bird’s throat. This prevents the birds from swallowing larger fish, which are held in their throat, but the birds can swallow smaller fish. When a cormorant has caught a fish in its throat, the fisherman brings the bird back to the boat and has the bird spit the fish up. Though cormorant fishing once was a successful industry, its primary use today is to serve the tourism industry.”