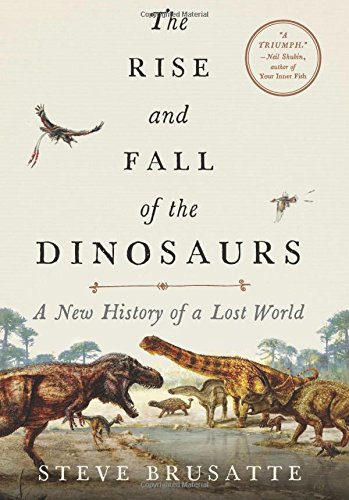 One thing I learned from this book is that paleontologists are party animals. Steve Brusatte, one of the top young dinosaur hunters in the world, has written a marvelous book that is part autobiography, part natural history, and part fossil hunting how-to. During the autobiographical parts, he gives us some humorous descriptions of how fossil hunters relax after a day in the rubble. Spoiler alert: Alcohol is consumed. Another thing I liked about this book is the further you read, the better the book gets. When I was about halfway through it, I wished he would tell readers a story of dinosaur encounters told by the fossils in a certain place—and darned if he didn’t do exactly that! And of course, like in plays and works of fiction, this book has a climax: the impact of the Chicxulub asteroid that ended the Cretaceous Era and the Age of Dinosaurs. But it also has a denouement, a tying together of all loose ends: the dinosaurs are still with us in the form of birds. My only criticism of the book is that in the early parts there are mentions of dozens and dozens of dinosaur species that do not have illustrations, so the book drags a little, but Brusatte picks up the pace and the story becomes fascinating. This is the best dinosaur book I’ve ever read; it’s even better than Walter Alvarez’s T. rex and the Crater of Doom (1997).