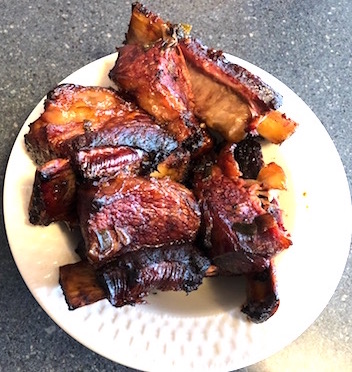 When I received the email from Kingsford’s marketing people who were eager to promote their new line of smoker pellets, they offered to send me four different flavors to test–cherry, oak, hickory and competition blend (oak, hickory, and cherry). So when I got the pellets in the mail, I needed to find a recipe for the pellet flavor I selected, which was cherry.

Of course I went to my favorite book by Dr. BBQ (Ray Lampe), Slow Fire, and found his recipe for Korean-Style Barbecue Short Ribs. Three pounds of short ribs at Whole Foods set me back $30, but I got a Prime Day bonus credit of $10, so that was a pretty good deal. Three pounds meant 4 ribs, so they were huge. I made the marinade by combining soy sauce (1 cup), 8 green onions chopped up, 1/3 cup brown sugar, 1/4 cup rice vinegar, 6 smashed garlic cloves. 2 tablespoons crushed fresh ginger, 1 minced serrano chile, and a tablespoon of sambal oelek. I put the ribs in a 1 gallon zip bag, poured the marinade in and marinated them for 3 hours, turning the bag every half-hour. Then, using cherry pellets, I smoked the ribs for two hours. The result is the top image on this page. 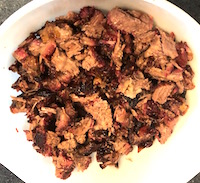 My next step was to place the ribs in a metal pan. I simmered the marinade for ten minutes, strained it, and mixed 1/4 cup of it with the same amount of apple juice, poured the mix over the ribs, sealed the pan with aluminum foil and put it back in the smoker for two more hours. This makes the meat very tender. Ray suggested cutting the meat off the bones, chopping it, and making Korean tacos, so that’s what I did. I tasted it, of course, and the cherry pellets worked well. It was great. While the meat was smoking for the second time, I took a daikon radish and an English cucumber and sliced them thinly and poured vinegar over the slices, them sprinkled them with a little sugar. 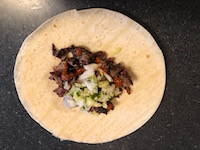 After marinating for an hour, I minced them together. Using mu-shu wrappers, I made the Korean tacos by adding sriracha sauce to the meat, placing the “slaw” over the meat, and folding up the wrapper to make a package. 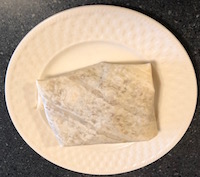 Here’s what the final Korean Taco looked like. I was so hungry that I took a photo of the taco before adding any garnish! The combination of Kingsford’s cherry pellets and Dr. BBQ’s recipe made my experiment a memorable meal.

How to Build a Smoking Closet and Smoke a Brisket, 1871