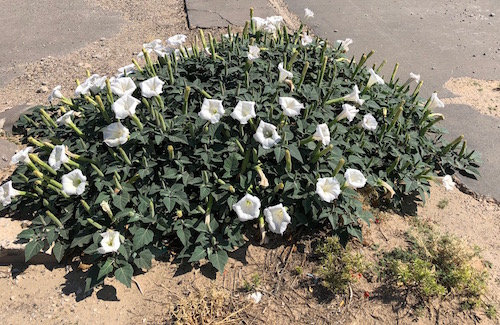 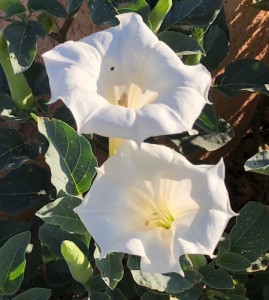 Another example of the weed vs. wildflower debate, this evil-smelling plant, also called datura, Thorn apple, Devil’s apple, stinkweed, and angel’s trumpets, packs a powerful punch. It is extremely toxic and was used by Native Americans as an hallucinogen. The name “Jimson” is a corruption of Jamestown in Virginia, where it put two colonists in a “frantick condition” for eleven days where they turned into fools. They could have died from , poisoning, all very powerful alkaloids. It’s an annual plant that seemingly can grow anywhere, like this broken-up parking lot above. In India the plant is associated with prostitution, because the working women would feed datura seeds to their customers to render them unconscious in order to steal their purses. Their seeds also last a long time–seeds thirty-nine years old have a germination rate of ninety percent. Keep this plant away from children, pets, and hippies.

A Weed By Any Other Name…