Imagine a sauce that replicates the bite of a tarantula. That’s what Steven Trim of Venomtech in Kent, England has now accomplished. He writes:

Chilli peppers (properly known as Capsicum species) have relatively delicate seeds. When they are eaten by mammals, like us, they are often destroyed by the digestive process. They can, however, survive, grow and spread after being eaten by birds. To make sure that birds want to eat their seeds, but us mammals don’t, chillies have evolved a noxious compound called capsaicin,  which tastes hot to mammals but not to birds.

In mammals, capsaicin binds to a taste receptor called TRPV1 (pronounced trip-V1). This is an acronym for Transient Receptor Potential – Vanilloid 1. The TRPV1 pathway is different in birds and is not affected by capsaicin. The activation on TRPV1 fools the brain into thinking that chillies are hot. In most mammals, this is offensive and they instinctively try to avoid such pain. However, us strange humans sometimes find such pain attractive and even addictive. This is why chilli sauce exists.

Where natural selection is concerned causing pain is a good way to deter predators from trying to kill you. Several animals have evolved venoms that contain TRPV1 activators as a way of causing excessive pain for defense. The Trinidad chevron spider (Psalmopoeus cambridgei) is one such species. 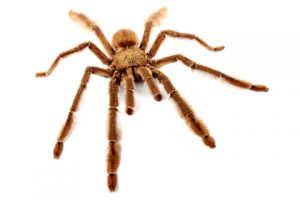 When it was first discovered, this toxin was named Psalmotoxin, but is now properly called T-theraphotoxin-Pc1a, which is less catchy. Unlike capsaicin this toxin also activates bird TRPV1 channels as it binds to a different site. By mimicking the heat of chillies, the spider warns potential predators. This piece of venom science was the inspiration behind Venom Chilli Sauce.

Our Venom Chilli Sauce is a venom-inspired, hot chilli sauce for use in cooking, or as a condiment. We have produced it to our specific requirements, to mimic the venom action of the Trinidad chevron spider. There is no actual spider venom in the sauce, but rather an analog.

To order the sauce, go here.

Mammals of the Valley