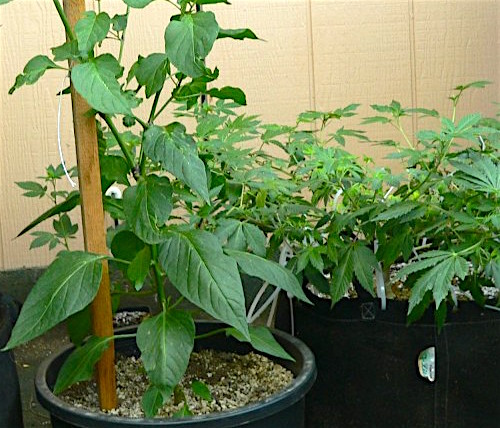 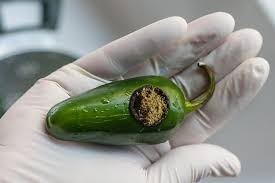 In the Afterword of my book, Growing Medical Marijuana, I speculated that humans had coevolved with both chile peppers and marijuana much like honeybees coevolved with flowers. Now, new evidence from the University of Connecticut indicates a very close relationship between two totally unique drugs: the capsaicin in chile peppers and tetrohydrocannabinol (THC) produced by marijuana. The UConn report states: “You wouldn’t think chile peppers and marijuana have much in common. But when eaten, both interact with the same receptor in our stomachs, according to a paper by UConn researchers published in the April 24, 2017 issue of the journal Proceedings of the National Academy of Sciences. The research could lead to new therapies for diabetes and colitis, and opens up intriguing questions about the relationship between the immune system, the gut and the brain.”

UConn researchers fed capsaicin to mice, and found that they had had less inflammation in their guts.  At the molecular level, the researchers realized that the capsaicin was binding to a receptor called TRPV1, a neurotransmitter located on specialized cells throughout the gastrointestinal tract. When capsaicin binds to it, TRPV1 causes cells to make anandamide. Anandamide is a compound chemically related to the cannabinoids in marijuana. It was the anandamide that caused the immune system to calm down. And the researchers discovered they could get the same gut-calming results by feeding the mice anandamide directly by way of marijuana.

The report concludes: “The researchers are still working with mice to see whether it also affects disorders in the bowels, such as colitis. And there are many other questions yet to be explored: what is the exact molecular pathway? Other receptors also react with anandamide; what do they do? How does ingesting weed affect the gut and the brain?”