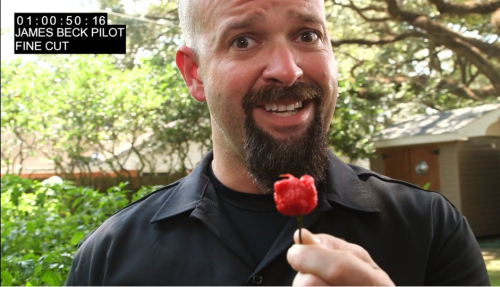 My good friend James Beck of iBurn has been busting his ass for a year and a half trying to produce and sell a pilot for a new documentary series about chile peppers and fiery foods. He wants to know what aficionados think of the pilot they’ve shot in rough form. James has the background:

About 18 months ago I hosted the pilot for a spicy food show at the request of a popular cable network. Let’s call this network ‘Gravel Channel’. We shot exactly what they wanted. Roughly a year later they said no to the concept because they decided to change their programming to primarily shows about ghosts and spirits. 👻

At the beginning of this year a popular streaming network also considered the possibility of airing a show about spice. Let’s call this platform ‘Notprix’. After months of research, development and careful consideration they rejected the concept because they weren’t interested in doing more food programming.

Apparently broadcast executives feel there is no demand for spicy food programs, so I want to see what you think. Watch the 21 minute video below and express your opinion in the form of action. If you like/love the video then like, love and share this post. If not, dislike or do nothing. Let’s see if these decision makers know you as well as they think they do.

🚨Disclaimer🚨– This is NOT the broadcast ready version of the show. This is what’s known as a fine cut. The narration is not me and the graphics have watermarks, but the segments are legit.

The Man in the Moon Loves Chile Peppers

Show Off Your Meat Video Contest

Vitamin A in Hot Sauce