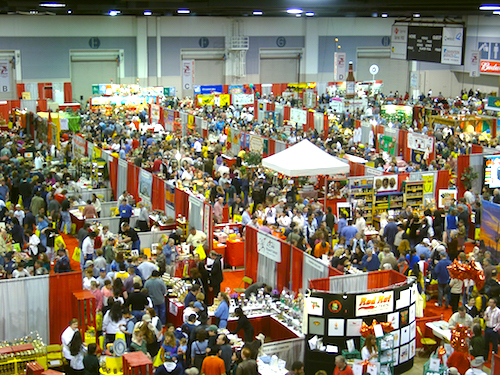 Above: Aerial view of the 2001 show at the Albuquerque Convention Center, Southeast Hall.

The National Fiery Foods and Barbecue Show coming up February 28—March 1 at Sandia Resort & Casino will be our 32nd annual event. As the founding producer of the show, I’m going to share some details of what it’s been like to produce a show that draws such huge crowds of chileheads. I’ve often said that managing the show is like being the mayor of a small city of 20,000 people for a weekend. But even mayors find it difficult to control every aspect of their cities.

Show producers are at the mercy of the weather, especially those brave souls who produce outdoor functions like wine festivals. Rain, high winds, and cold snaps can wreak havoc on such events. Early in my show production career I decided not to produce outdoor shows, and I never have. But even indoor events can be ruined if people cannot physically get to the venue. That happened to me in El Paso when I was producing a Custom Van and Truck Show at the Civic Center in November. A freak snow storm dumped a foot of snow on the city as the show opened on a Friday, and the Interstate highways were all closed. My attendance was fifteen paid customers, and I lost five thousand dollars in cash and all the expected attendance revenue.

Since that time, a major boon to show producers has been the establishment of show interruption and cancellation insurance, which saved the fifth annual Florida Fiery Foods Show at the Tampa Convention Center in 2011. Hurricane Irene brushed the city and panicked the populace, severely reducing the attendance at our event. I had taken out an interruption policy and filed a claim after the show. The insurance company promptly settled the claim for the amount I requested, and the show was profitable despite the bad weather.

Did I buy an interruption policy for our upcoming Albuquerque show? As Sarah Palin would say, “You betcha.”

Because they pay us money to display their products in our show, sometimes exhibitors think this gives them a special status, one that allows them to ignore the rules of the show. During one show, an exhibitor named Chuck decided that he could bypass the rules about sampling his products. We do not allow common bowls of chips that the public can access at will. This is because of contamination possibilities—one person can contaminate a bowl of chips with a single touch. So to taste a chip with salsa, the exhibitor, wearing gloves or using tongs, places a chip in a plastic or paper cup, then spoons some salsa over it. He or she then hands the cup to the customer. There is no contamination because only one customer touches the chip with fingers. Chuck ignored this procedure and had a bowl of chips and a bowl of salsa on his table, not only encouraging any customer to pick up a chip or chips, but possibly allowing “double dipping,” whereby a person dips a chip into the salsa, takes a bite, and then redips it into the same bowl—an obviously unsanitary procedure.

Chuck was warned several times by members of our staff, but refused to comply. Finally, as the senior show producer, I had to go speak with him. He complained about the rules and leaned on our friendship—we had coauthored a book together. I had to get tough—this was a health issue—and told him to obey the rules or security personnel would dismantle his booth and throw him out of the show with no refund. He finally complied and that was his last show with us.

And how often does a male show producer have to order a female exhibitor to cover her breasts? Yes, it really happened. I’ve long since forgotten her name—let’s call her Mimi. She was a pleasant, good-looking, well-endowed woman in her mid to late ‘40s selling spicy confections while wearing a blouse so low-cut that her nipples were partially exposed. Mimi had a lot of male customers but complaints came in from female exhibitors and she was not paying any attention to warnings from Emily. I had to go speak with her. I tried to be tactful and suggested that she wear a sweater. She refused.

“Cover your boobs or you’re out of the show,” I told her. Finally, Mimi’s adult daughter intervened and the crisis ended. Needless to say, my niece and my wife teased me endlessly about the “boob incident.” At least I had kept myself abreast of the situation.