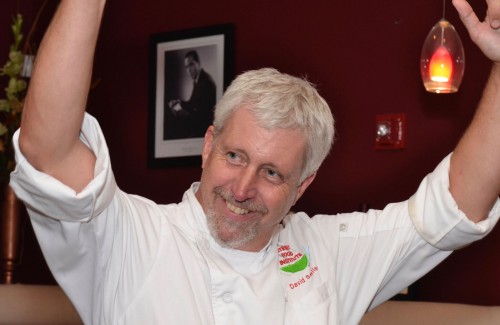 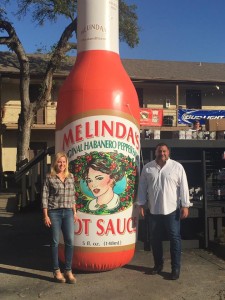 The weather was near perfect for the show this past weekend and that was one of the reasons that the 29th, sold-out-of-exhibitors show, was up 18% in attendance from last year. Also factored into that was the 505 Food Fights tournament, won by Chef David Sellers (pictured above) of the Street Food Institute. We helped Stacy Wilson raise $4870 for Project Lunchbox–to help relieve students’ lunch debts. One very popular booth at the show was Melinda’s Hot Sauce, and that was because they were giving away thousands of bottles of their famous hot sauce in order to better establish their brand in New Mexico. Their booth was easy to find in the lobby because the giant inflatable bottle was next to it.
We gave out booth awards for the show for the first time, and here are the winners: Most Beautiful Booth: All of Us, 116 & 215; Most Creative Booth: Frogbone Cajun Sauces, 312 & 411; and Most Sales-Oriented Booth: Mikey V’s, 132. The exhibitors were so pleased with the sales aspect of the large crowds that the 2018 show is already 60% sold out. Incidentally, a crew from National Geographic Explorer was videotaping at the show and did a long interview with me Sunday, so expect the show to be featured on an upcoming episode of the TV show.