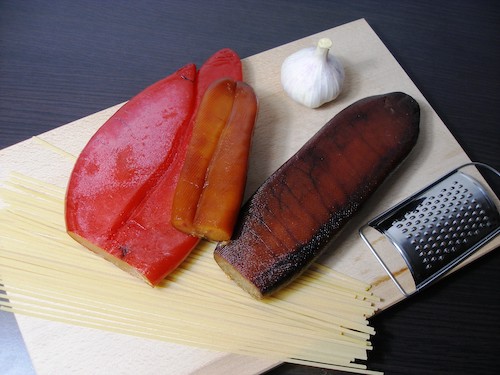 (Image Above: Bottarga Made from Ling, Mullet, and Tuna. Photo by Radobera on Wikimedia Commons. This photo is licensed under the Creative Commons Attribution-Share Alike 3.0 Unported license.)

Lately I have added another food history subject to write about: seafood and seafood products.  Long before I became obsessed with chile peppers and spicy foods, I was a seafood aficionado–I loved to catch it, cook it, and eat it, and still do. I’ve been researching seafood for about a year now, and even launched a blog, Seafood-Harvest.com. What continually amazes me is running across seafood products that I’d never heard of before. Most of these delicacies are salted and the Spanish versions are generically termed salazones. Here are a few examples.

Garum. Also known as liquamen, garum was the original fermented fish sauce and was a principal condiment in Greek and Roman cooking.

Bottarga. See the photo above. This is the roe sac of a fish, most commonly grey mullet, that is salted, hand-massaged to remove any air pockets, then pressed and dried. The website SeriousEats.com comments, “Anywhere humans fished, it seems, once they learned of this preservation technique, they extracted fish roe sacs and salted and dried them to produce a deeply savory pantry staple that’s resistant to rot.” Learn more about this delicacy here. 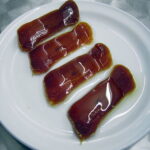 Mojama. The silky smooth, dark brown slab of tuna loin that is salt-cured and wind-dried. Mojama is made in the traditional manner using the loins of the tuna by curing them in salt for two days. The salt is then wiped off, the loins are washed clean of the salt residue, and then set out to dry in the sun and the breeze for fifteen to twenty days. It is usually served in extremely thin slices with olive oil and chopped tomatoes or almonds. In Madrid mojama is very popular as a post-lunch tapa and is served with beer and olives.

Hueva. In Spain, this is the fish roe (eggs) of tuna, mullet or ling.

Bonito del Norte. This is a canned product consisting of albacore white tuna, from the Cantabrian Sea in the Basque region of Spain combined with olive oil and a little salt, The term “bonito” is a little confusing. In Spanish it means handsome but in English it’s a tuna-related sport fish with red, bloody flesh that’s unlike albacore white tuna. 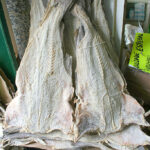 Bacalao. Salt cod. Dried and salted cod has been produced for more than 500 years in Newfoundland, Iceland, and the Faroe Islands, and most particularly in Norway where it is called klippfisk, or “cliff-fish.” Traditionally it was dried outdoors by the wind and sun, often on cliffs and other bare rock-faces. Today salt cod is usually dried indoors with the aid of electric heaters.

The Pigs of the Sea

The Art of Grilling Seafood