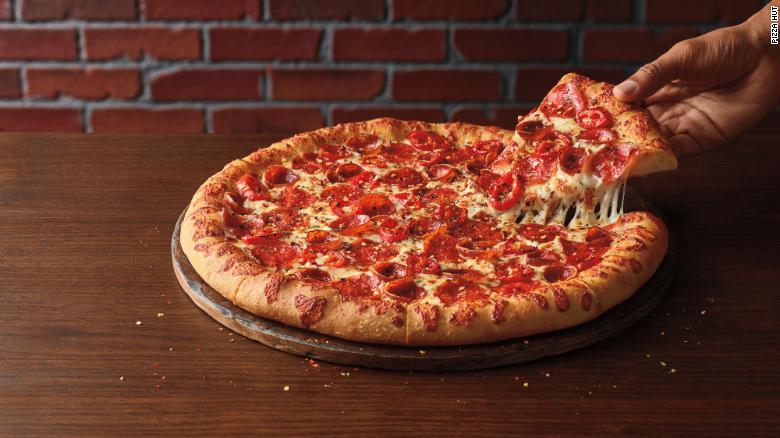 Pizza Hut’s New “Spicy Lover’s Pizza”
People are increasingly craving spicy food, Pizza Hut says. A third-party report from Technomic, a research firm that specializes in the food service industry, found that nearly 80% of fast food customers say they enjoy “moderately spicy foods,” and that spicy flavors attract younger and more diverse customers. That is likely to bring them and “their pizza-loving friends and family into the world of Pizza Hut,” potentially expanding its customer base, according to the report.
There are three versions to choose from: double pepperoni, chicken and pineapple, and a veggie version topped with green bell peppers, onions and mushrooms. Prices start at $12.99 for a large.
And Pizza Hut is not the only fast food operation joining the fiery foods movement. Arby’s claims to be selling the “spiciest sandwich on the market” with five sources of spice. And this week, Shake Shack (SHAK) rolled out a buffalo chicken sandwich and buffalo-spiced fries. Plus there are numerous spicy fried chicken sandwiches available at Wendy’s, Popeye’s, McDonald’s and Burger King.
When Mary Jane and I launched the National Fiery Foods and Barbecue Show 33 years ago, people told me that fiery foods were just a fad. “That’s right,” I would reply, “and they’ve been a fad for 2,000 years now.” Is it sad to see fiery foods go mainstream? I don’t think so. It proves what we’ve been saying all these years, and opens the door for even more spicy entrepreneurs.
The full Pizza Hut story is here.

The Fiery Foods of Spring