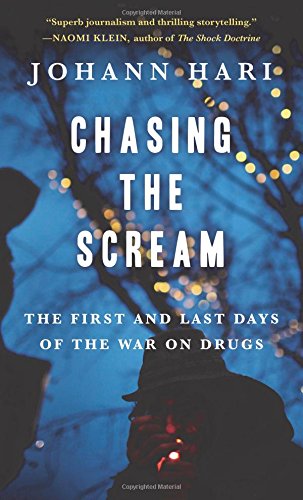 I have a small section of my library that’s devoted to drugs, from Marijuana Botany to Hallucinogens and Shamanism. There are maybe 35 titles in my collection, but by far the best one is the one I’m reading now, Chasing the Scream: The First and Last Days of the War on Drugs. The author, Johann Hari, stunningly makes the following three points: “Drugs are not what we think they are. Addiction is not what we think it is. And the drug war has very different motives to the ones we have seen on our TV screens for so long.” One of his most interesting analogies is the spectacular failure of Prohibition, and the fact that, when it was repealed, some of the gangsters who were smuggling spirits and running the speakeasies were forced to declare bankruptcy. Compare that to the legalization of marijuana and we see that the smuggling of that drug from Mexico is way, way down. No self-respecting American wants to buy Mexican weed when the U.S. growers have perfected the art of organically-grown marijuana with little or no seeds or stems. When we look at heroin addicts living on the street, which came first, the drug or the environment? Hari notes that 90+% of all addicts grew up in broken or abusive homes and had horrible childhoods. Heroin became their solace that took away the pain. When soldiers returned from Vietnam addicted to heroin and re-entered their former lifestyles with family, friends, and jobs, and without their buddies being blown up, how many of them remained addicted? Fewer than 5%! This book will make you think and sometimes will bring you close to tears. I highly recommend it.