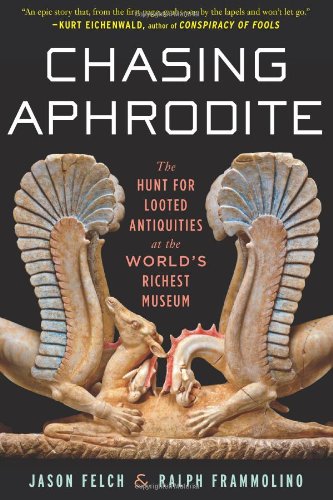 I have a fondness for museums that began when my parents took my brother and I to the Smithsonian Institution in D.C. and the American Museum of Natural History in New York. Also, I’ve served on the board of directors of the New Mexico Farm and Ranch Heritage Museum for 15 years, so I know a bit about how museums operate. Still, I was astonished to read this book that details the incredible hypocrisy and arrogance of the Getty Museum’s directors who, while in charge of the world’s richest museum, were dealing in looted ancient artifacts–and blatantly lying about it. This mind-boggling story reads like fiction, but unfortunately is true. Chasing Aphrodite: The Hunt for Looted Antiquities at the World’s Richest Museum was written by Jason Felch and Ralph Frammolino, two investigative reporters at the Los Angeles Times, and they did a great job telling an almost unbelievable story of greed, arrogance, and self-deception. Provenance is the key word in this book, meaning the record of ownership of a work of art or an antique, used as a guide to authenticity or quality. What did the directors do to hid the fact that they were buying looted art? They simply invented fake provenances for the art they were buying and exhibiting–until they were caught in the act by Italian investigators who sued the museum and its directors for the return of the stolen artifacts. I love a good con story, and this is one of the best I’ve read. Buy Chasing Aphrodite here.

Not All Museum Expenses Are Approved