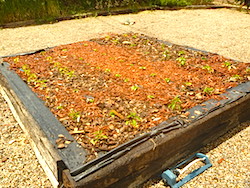 As many readers know, Mary Jane and I were traveling extensively in late April and throughout May–Washington, D.C., NYC, Italy, Orlando, and Milwaukee. This had an impact on the state of our gardens because I usually plant around May 10. I finally got the culinary gardens planted three days ago, so I’m about three weeks late. Above is the chile pepper garden, the least developed. It looks weak, but that said, plants always race to reproduce, and many of the late ones catch up and sometimes surpass the earlier ones in yield. This is a hobby farm rather than the microfarms I’ve been writing about lately, so the huge superhot chile farms are gone, as are the hundreds of those plants in the backyard. I do have one Barrackapore that I wintered over, so I’ll be writing about that in a later post. I just took these shots after a rainstorm, so we’re looking really good. 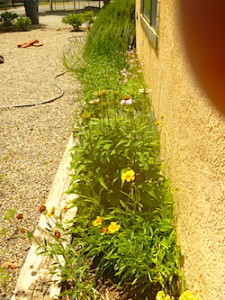 All perennials, this garden bounced by in no time. 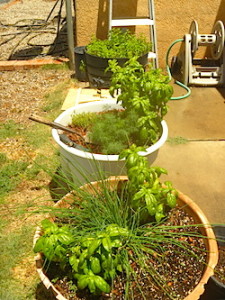 We’re already using the chives, basil, dill, and mint. Plus we have oregano, sage, Italian parsley, and thyme in other herb gardens. 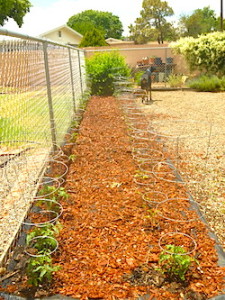 The tomatoes are taking off, but I worry about curly top virus. I had to replace 1/3 of the plants last year. The large dog unit in the distance is Jagger Henley.

The Revival of a Barrackapore

What a Difference a Month Makes

Mulching and Irrigating the Pepper Garden