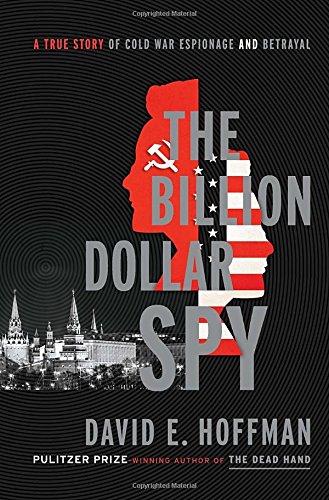 This is a nonfiction book. Remember that because it reads a lot like a spy thriller. David E. Hoffmann mostly tells the story of Adolf Tolkachev, an engineer in a Soviet military design bureau, who used his hatred to the then Soviet system, combined with his high-level security access, to hand over tens of thousands of pages of technical secrets to the C.I.A. His revelations caused the U.S. government to redesign its weapons systems to defeat Soviet radar on the ground and in the air, giving the United States near total superiority in the skies over Europe. It is a gripping tale that holds your attention, and for me it pointed out something I hadn’t thought of before: how a change in handlers can affect a spy mission. Until he’s caught or quits, a spy is in place indefinitely. But his handler is not, and handlers are routinely reassigned to other countries, and a new handler has a delicate task to regain the trust that the previous handler took with him–or in some cases, her. The life of a spy like Tolkachev is unbelievably stressful because one mistake and you’re literally dead. On the other side, if a handler screws up, he could easily lose his spy and his own career. Reading this book made me very nervous, but I learned a lot and liked it. Buy all formats of the book here.