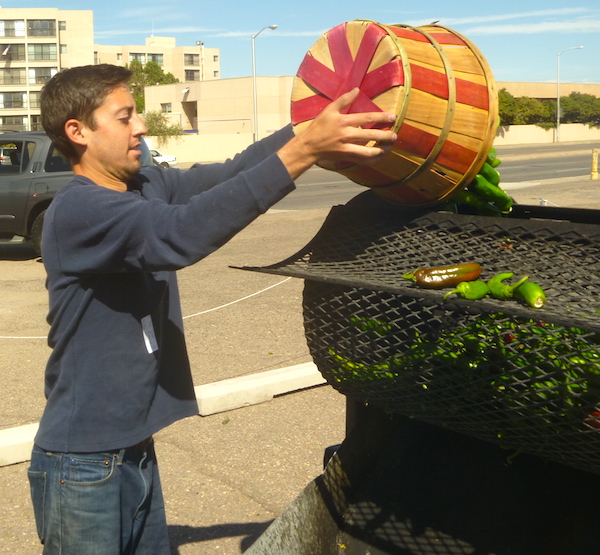 The last time I saw Tim Sichler (above) he was eight years old and I was doing a video interview with him because his parents, Eleanor and John, had proclaimed him to be “The Youngest Chile Roaster in the World.” Sichler Farms, a retail harvest-time food stand near the intersection of San Mateo and Lomas, has been around for about a quarter century and it’s the place where I buy the green and fresh red chile that they grow in farms near Los Lunas and Belen, south of Albuquerque. Phooey on Hatch–I’m buying local. So, twenty-two years after first meeting Tim, Eleanor told me he was coming back for a week to work roasting chile again at the stand. So of course I had to re-meet this chile roaster, now an investment analyst (or some title like this) in Boston. He actually remembered me, we had a jovial visit, and we’re meeting for beers at La Cumbre Brewery later this week. Also at Sichler’s was Kelly Urig, first-time author of the book New Mexico Chiles: History, Legend and Lore. She was signing books, so I had her sign one for some friends of mine. Did I buy any chile? No, because the Sichler Mediums had not yet been harvested. I’ll go back in a week. More info at  Sichler’s website and their Facebook Page. 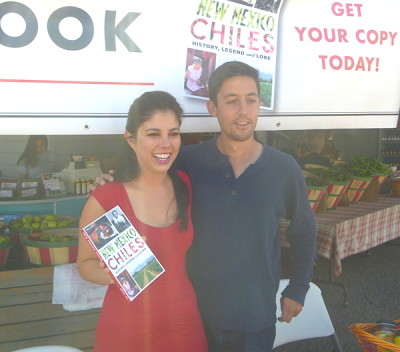