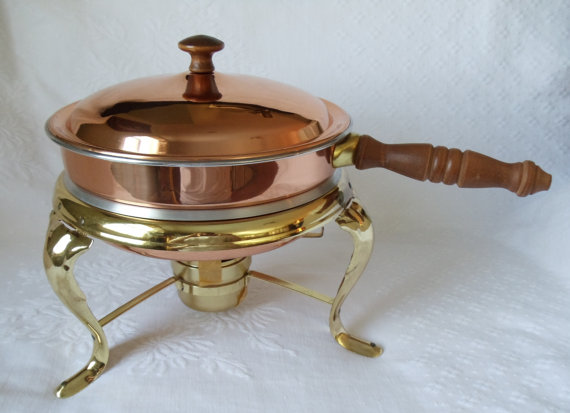 Well, it’s not ancient in the sense of classical Rome, but in today’s world of rapid technology change, the chafing dish (from the French chauffer, “to make warm”) is a bit dated.  They go back to the eighteenth century but really had their heyday from the turn of the twentieth century through the 1950s. We have two of these antiques, one passed down from my mother and the other from MJ’s mom. They were mostly used for fondues and to keep food warm in buffets. Since we weren’t serving cubes of bread on sticks, it was the latter use we were seeking. One of the things about feast days that drives me nuts is the length of time it takes to pass the turkey and seventeen side dishes around a table of eight. The food always gets cold. But if you keep everything warm with the food in the top dish and hot water (heated by canned heat, or Sterno), and make a buffet, everyone gets hot food in a fourth of the time it takes to pass everything around the table. Note: The old chafing dishes take a 2.7-ounce can of Sterno, but these are difficult to find because supermarkets and big box stores are now selling the larger, 7-ounce cans used in camping stoves, and they won’t fit into the bottom holder of the dish. The smaller cans can be ordered online.