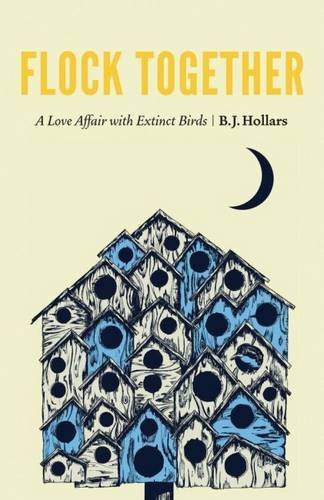 Flock Together: A Love Affair with Extinct Birds by B.J. Hollars
University of Nebraska Press, 2017

This memoir would be best read by beginning birders, which I am not. I still have my first book on the subject, Birds: A Golden Nature Guide, and its publication date is 1949. Dates written in the back of the book show that I identified a blue jay on May 13, 1955, when I was eleven years old, so I’ve been birding for quite a while. Not so the author of this book, B.J. Hollars, who became fascinated with extinct birds, namely the ivory-billed woodpecker and the passenger pigeon, and his quest to learn more about them inspired him to become a birder despite the intimidation he felt from a lack of basic bird knowledge.
The subtitle, “A Love Affair with Extinct Birds,” led me to believe that this would be a history of avian extinction, but this was not to be. Extinction, then, in this book is a motivating hook rather than a theme to be explicated. Two other problems for me with this book was its regionality—specifically birding in Wisconsin, and the constant references to and quotes from a hermit named Ziller and a passenger pigeon expert called Schroger in their correspondence to each other. This seemed like padding to me as it was neither very interesting nor educational.
All that said, two moments in the book stand out for me. In the first, Hollars goes on a pilgrimage to visit a stone moument to the passenger pigeon in Wyalusing State Park. It’s a miniature monolith with a plaque that reads, “The species became extinct through the avarice and thoughtlessness of man.” The quote is as powerful as it is brief. In the second, he learns that his extinct bird fascination will mean compromising with his family in order to feed his obsession. “In exchange for a hotel with a pool within walking distance of Navy Pier,” he writes, “I’ll get to spend some time with a dead woodpecker.” And that, of course is a stuffed ivory bill at the Field Museum.
If I were grading this book like a student’s essay, I would give it a C plus and recommend it for younger readers. Note that this book has not yet been published, to you will have to preorder it.

A Flock of Fowls