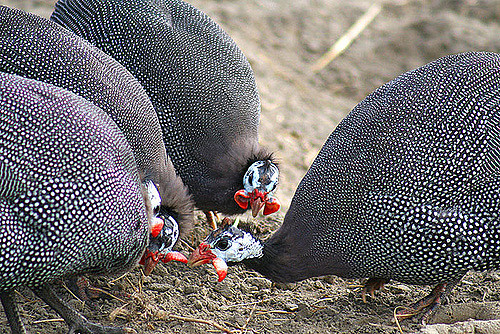 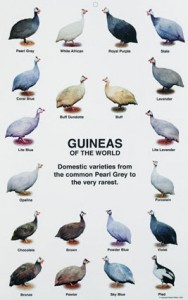 My bird sighting this morning has only happened once before in a quarter century of walking around the South Valley of Albuquerque: I saw a flock of guinea fowl roaming through the alfalfa looking for insects to eat. These birds are semi-domesticated. People who have barnyards raise them like chickens but because they are hard to catch, it’s difficult to keep their wings clipped. So despite the fact that they are well fed, they like to fly around and visit farms in the area. Originally from the jungles of Africa, there are quite a few species of these birds.
I’ve only eaten a guinea hen once, at Jeffrey’s Restaurant in Austin, and at the time, my wife and I agreed it was the best poultry we had ever tasted. Better than duck, turkey, or pheasant. It’s meat is available from D’Artagnan but it’s a little pricey–a 2.5 to 3 pound whole hen is $35.99 fresh and $33.99 frozen, plus Fed Ex overnight shipping. Guinea hen recipes–most of them roasted whole birds–are all over the Internet. I would like to try raising one, but my Doberman  Jagger Henley probably wouldn’t like it.
Many years ago I raised chickens in my basement in Richmond and every day I hand-carried them outside to spend the day. It was funny to see me carry them out when they were full grown. Cheep was a very large rooster while his sister Chong was much smaller, but they never complained about me carrying them. They were thinking: grasshoppers for breakfast. And if you’re interested in raising guinea fowl from keets (Guinea-speak for chicks), WR Hatchery and Game Bird Supply has them for $3.40 each.