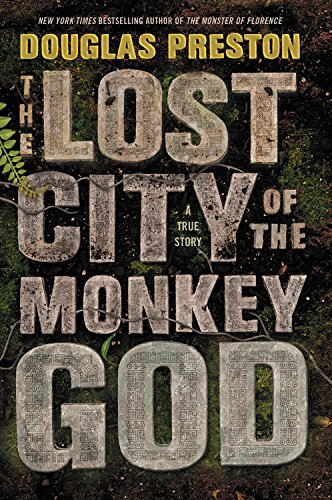 Being a blogger who publishes frequent book reviews, I’m a member of NetGalley.com, which provides advance reading copies of new books by publishers of all sizes. We select certain genres that we read and and would like to review, and often, after requesting a title, publishers will agree to send an advance copy our Kindle.  Thrillers are the hardest to obtain because it’s a popular genre, and science books are easy to obtain because fewer people feel qualified to review them. The Lost City of the Monkey God was a good fit for me and you see why in the short review below.

Douglas Preston predicted subtly in this book that hard-core archaeologists would hate its title. “Lost city” is an explorer’s trite phrase and has no scientific meaning, while “monkey god” is more likely to be a clan figure than a central deity. Well, I love the title because this book has everything I particularly like in nonfiction: jungle exploration, archaeological investigation, botany, geology, deadly creatures, cutting-edge science, pre-Columbian history, pandemics, and personal danger. Books in this same fields that I have loved are The Search for El Dorado, The Lost City of Z, The Lords of Sipan, The Hot Zone, and Spillover. The fall of major civilizations is usually attributable to an act of God, whether it’s drought, famine, war, or disease–and in some cases, multiple causes. Preston theorizes that the mass destruction of the prized artifacts in the early 1500s at Ciudad Blanca, aka City of the Monkey God, was directly attributable to the fact that more than ninety percent of the city’s population was wiped out by diseases brought by the invading Spanish. So the smashing of their own treasures was a final straw, a way of saying that their way of life was completely destroyed and they no longer needed this images where they were going–back into the jungle. This is an excellent book that I recommend highly. It will be published on January 3, 2017 by Grand Central Publishing.