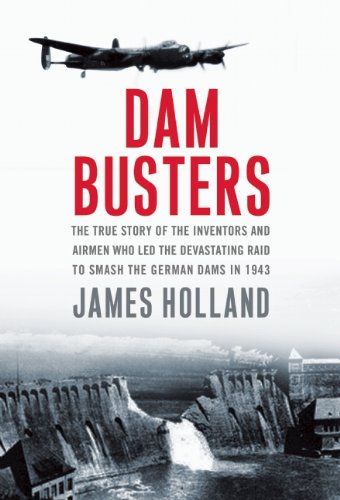 In college, I spent a year and a half in Navy ROTC and got straight A’s in the Naval Science courses. This led to a strong interest in military operations in general, and specifically in complicated missions that resulted in spectacular losses for the enemy. One such mission occurred in 1943, when nineteen specially fitted Lancaster bombers took off from an RAF field in Lincolnshire, England. Each of those bombers carried a single 9,000 pound bomb, and their mission was to destroy three German hydroelectric dams that powered the Third Reich’s munitions and aircraft factories. James Holland tells this thrilling story in his book Dam Busters: The True Story of the Inventors and Airmen Who Led the Devastating Raid to Smash the German Dams in 1943 (New York: Grove Press, 2012). It is a tale of great logistics, with scientists working closely with the Royal Air Force commanders to plot the raid across Germany at tree-top heights. Of the nineteen bombers, eight were shot down or crashed, and of the 133 aircrew who participated in the attack, 53 were killed, a casualty rate of almost 40 percent. But the Germans lost three dams and about 1,600 people drowned from the resulting flooding. Holland does a great job with this book, and it’s military history at its finest. Buy Dam Busters here.