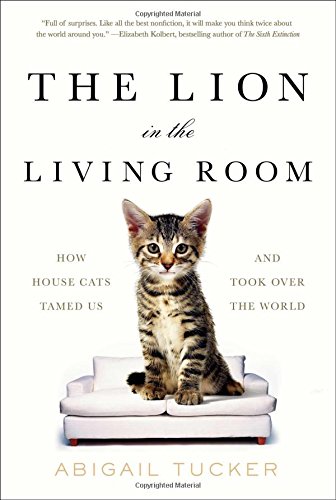 Abigail Tucker’s first book looks like it’s just about feline pets, but in reality it concerns history, natural history, genetics, epidemiology, sociology, invasive species biology, extinctions, and euthanasia. In fact, it’s the best book I’ve ever read on cats. I learned how cats became domesticated—they domesticated humans rather than vice versa. I also learned that all domesticated cats came from one species, Felis silvestris lybica, the African wildcat, often called the African forest cat. With house cats now outnumbering dogs in American families and in the wild, Tucker tells us why this is so, but still wonders why people love cats so much when, unlike dogs, they don’t really do anything useful, like hunt for us, or act as guards, rescue people or track them down, detect tumors or cancers, and in the past, turned spits for roasting over fires. And except for occasionally catching mice and rats, cats sleep fifteen to twenty hours a day. So why do we love them so much? Tucker loves to make sweeping statements like “Cats, though, are self-contained. They don’t need people to complete them.” I don’t know how many cats Tucker has lived with—she only mentions two family cats, both long-lived—but from her photo, I’m about twice her age and have lived with dozens of them. Many of them didn’t have the aloofness and independence she ascribes to all domesticated felines. Roswell, for example, who my wife and I have lived with for sixteen years is very much not self-contained. She runs around like crazy, entertains us, and makes us laugh. She does, indeed, need us to complete her. Or at least it looks that way to us. House cats have a wide range of personalities from extreme independence to being pests that always demand attention. Don’t get me wrong, despite her occasional generalizations, Abigail Tucker has written an excellent, informative, and incisive book that I recommend highly.