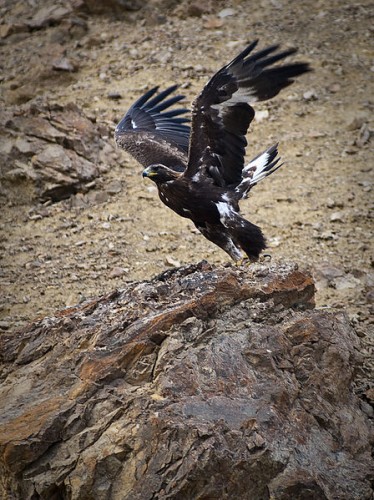 Yesterday, I was walking next to the west drain along the Rio Grande around 8:15 am when I was startled to see a sight like the one above–a golden eagle taking flight. But the setting wasn’t like the one above, in Denali National Park in Alaska. This eagle took off from someone’s backyard about 30 feet away from me. I’ve seen goldens in the South Valley before, but they were always perched quite a distance away. The only other winter bird in New Mexico that comes close to resembling the golden is the red-tailed hawk, but there are size and appearance differences:

The golden eagle is around twice as large as the red-tailed hawk, so mistaking them is difficult. And as far as their habitat, you ask, don’t goldens live in the nearby mountains? They do, but as the authors of Raptors of New Mexico state, “Golden eagles are resident through much of New Mexico, from desert grasslands to mountain meadows.” And, apparently, some people’s back yards. It’s every birder’s dream for an unexpected sighting like this one.