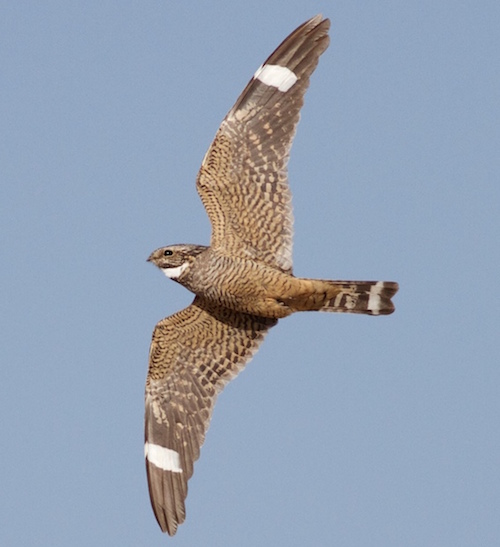 As many of you know, I’m a recreational hiker, mostly in the South Valley of Albuquerque, which is a mix of residential houses, agricultural fields, and the bosque along the river that is part of the Rio Grande State Park. While out in nature, I count the number of species of birds I see. For more than two decades, my goal has been to see thirty species, and I’ve been stuck on 29 for a couple of years. This morning, the birds just kept on showing up during my hike of 4.54 miles, and by the time I had gone a mile and a half, I’d spotted 16 species and figured out that it was going to be close to the record. A roadrunner was number 29 and the bird above, a lesser nighthawk, was number 30, and broke the record. I still had 3/4 of a mile to go, but every bird I saw was already counted. There were a couple of odd things about breaking the record. First, I’ve been doing this for more than 25 years, and this was the first time I’ve ever seen a nighthawk. As the name implies, they usually fly from dusk to dawn and by the time I saw the nighthawk, it was 7am and the sun had been up for about an hour and a half. And another thing–I didn’t see any raptors, and I usually see either a kestrel or a Cooper’s hawk. Despite its name, the nighthawk is not a raptor–it’s related to the whip-poor-will. I think I’ll have a beer to celebrate!